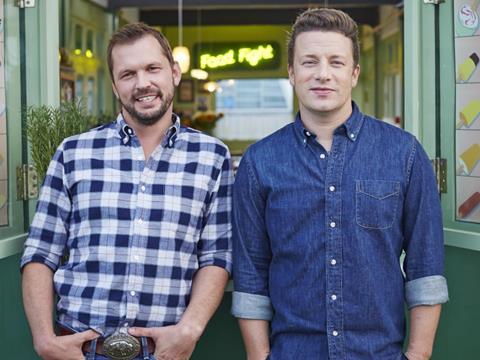 Asda is to trial the sale of ‘wonky’ veg as TV chef Jamie Oliver launches a campaign encouraging shoppers to buy misshapen produce.

Crooked carrots, knobbly pears and wonky spuds will hit shelves - alongside other items - in five Asda stores from 26 January.

Branded Beautiful On The Inside, it will be bagged separately and sold at a lower price than standard produce as the supermarket looks to increase customer awareness and make “ugly food more accessible”. In a bid to appeal to families, the wonky fruit and veg will feature characters such as Paul Potato, Suzie Swede, Alfie Apple and Penny Pear.

The move has been inspired by Jamie Oliver and Jimmy Doherty, who are tackling food waste in their new Channel 4 series Jamie and Jimmy’s Friday Night Feast.  Airing tonight (2 January), the first programme in the series will see Jamie and Jimmy meet farmers, who told them significant amounts of their veg wasn’t being sold fresh because it was wonky or ugly.

“If most Brits had half an idea of the amount going to waste, they’d be snapping up ugly veg by the trolley load,” said Oliver. “There’s no difference in taste or nutritional value. This is perfectly good food that could and should be eaten by humans. When half a million people in the UK are relying on food banks this waste isn’t just bonkers, it’s bordering on criminal.”

The duo approached Asda and suggested running a trial in store to understand customer perceptions of wonky produce and whether they would be willing to buy it at a discount. A survey revealed 65% of shoppers would be open to buying oddly shaped fruit or vegetables if they were good quality, with three quarters saying lower prices would be the biggest motivation.

“Even if fruit and veg have some knobbles and blemishes, this doesn’t affect the quality or taste - a carrot is still a carrot,” said Asda produce technical director Ian Harrison. “Customers are simply looking for great tasting, fresh produce at a value price.”

“Our Beautiful On The Inside range, which would have either gone to waste or been used for further processing, will now be celebrated for its freshness, value and quality. The new specifications mean up to 20% more of a citrus crop, 15% more swede and 10% more potatoes could be sold fresh in-store,” he added.

If the trial proves successful, Harrison said it could be expanded to other fresh produce lines.