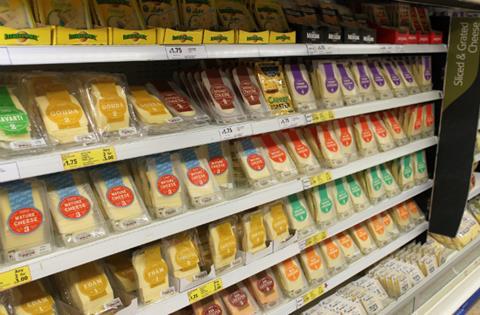 Fears of a cheese and butter shortage as a result of tightening milk supplies have already started to materialise, suppliers have warned.

Already high wholesale prices for butter rose by another 6% from September to October to £3,750/tonne [AHDB Dairy] due to low supplies and were now higher than £4,000/tonne, according to one major supplier.

“There is also real concern that when demand for Christmas cream starts, UK retail won’t have enough UK butter,” the source warned.

“It’s a massive volume and normally pulls all of the December fat out of the market, but this year supplies just aren’t there. Either not enough cream now or not enough butter later. That’s the choice.”

Milk supply remained a huge problem, said another supplier, who agreed there simply wasn’t “enough supply of cheese or butter in the system”. And this, along with an increase in the cost of production of about 1.5ppl due to higher input costs from the weak pound, had contributed to a spate of massive farmgate price increases over the past fortnight.

Cheesemaker Barber’s last week announced a 6ppl increase between now and February. The likes of Yew Tree Dairies have shaken up the market with a minimum 30ppl price for October production, while Lactalis was expected to announce a price hike for its milk suppliers as The Grocer went to press.

“We expected these price rises to stall in Q1 next year but that isn’t going to happen unless we get an improvement in milk supply,” said one supplier. ”A hard winter could make things even worse for supplies.”