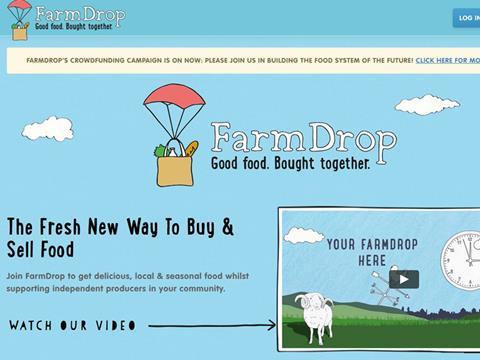 Launched in April 2013 to enable shoppers to order food from a range of local suppliers and collect it at a single ‘hub’ location once a week, FarmDrop is seeking investment to expand across the UK.

Currently there are five active FarmDrops in London and the South East but Ben Pugh, who co-founded the business with Ben Patten in April 2013, hopes to boost numbers to 400 around the UK by June 2017.

Pugh said FarmDrop suppliers keep 80% of the retail price of their goods, rather than the 50% they might make through traditional retailers and wholesalers. Pugh launched the business after buying a butternut squash for £3 in a London supermarket. He drove to the farmer in Kent who’d grown it and discovered he would only receive £1. “I thought to myself that doesn’t make any sense. So rather than the producer just getting a third of the price, why not build a platform where the producers get 80%,” said Pugh, adding the remaining 20% was equally split between the hub managers and FarmDrop.

“It takes three days from placing the order to collecting the item,” Pugh added. “The farmer will only pull the carrots out of the ground because you’ve ordered them, which lowers wastage.” Streetcar founder Akker added: “I believe FarmDrop is set to become the next big thing in UK food retail, providing both producers and end consumers with benefits that haven’t existed in the market to date.”