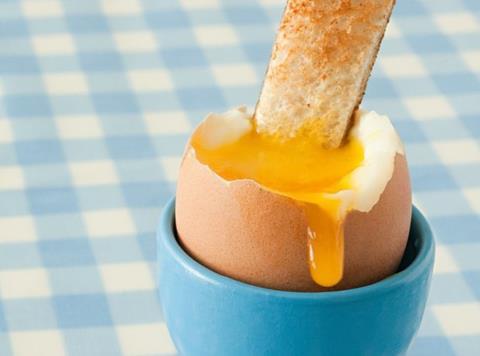 New safety advice on runny egg consumption has moved one step closer after the FSA lauched a consultation into proposed new guidelines.

The consultation – on final guidelines published this week by the Advisory Committee on the Microbiological Safety of Food – propose a relaxing of 15-year-old advice for vulnerable groups such as pregant women and the elderly, to avoid eating runny and raw eggs.

It comes after the Committee found that eggs produced to British Lion or equivalent standards posed a “very low” risk to health.

Once the eight-week consultation on the ACMSF’s proposals is complete on 16 September, the FSA is expected to change its advice that eating raw or runny eggs, or any food containing them, may cause food poisoning.

“The Committee has found that there has been a major reduction in the risk from salmonella in UK hens’ eggs since 2001,” said ACMSF chairman John Coia. “This is especially the case for eggs produced under the Lion Code, or equivalent schemes. It also recommended that these eggs could be served raw or lightly cooked to both those in good health and those in more vulnerable groups.”

The ACMSF’s final proposals follow an interim report published in January that suggested consumption risks had declined, prompting calls from the egg industry for the the FSA to relax its guidance. Confirmation of the “very low” risk by the ACMSF’s final report was welcomed by the British Egg Industry Council’s chairman Andrew Joret.

“This is a great success story for British agriculture. The investment we have made in eliminating salmonella and the safety record of British Lion eggs means we have been confident for some time that even vulnerable groups such as pregnant women, babies and elderly people should be able to consume them when runny,” Joret said.

“The proposed new advice is particularly relevant for mothers as health experts say that eggs are an important food for them and their babies, containing many nutrients that are important in both pregnancy and weaning,” he added. “Emerging research also suggests that introducing eggs early in the weaning process may help reduce the risk of the baby developing an egg allergy.”