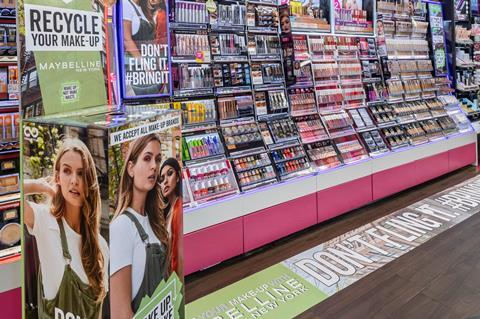 Recycling points will roll out to 1000 locations across the UK

L’Oréal is rolling out 1,000 cross-brand cosmetics recycling points into supermarkets across the UK.

The beauty giant has launched a new recycling campaign called ‘Make-Up, Not Make Waste’ in partnership with TerraCycle, under its Maybelline brand. The recycling points will hit Tesco, Sainsbury’s, Superdrug and Boots stores throughout September.

Shoppers will be able to recycle containers from any brand, not just L’Oréal, through the scheme, with accepted items to include compacts, palettes, mascaras, liners, lipstick and lipgloss tubes, foundation and concealer tubes and bottles, and other make-up packaging such as caps, pumps and trigger sprays.

The brand is advising that packaging should be “as empty as possible” though it is happy to accept old make-up with “some residue” left inside.

However, nail polish bottles and make-up brushes will not be accepted.

It said the move would save 900 tonnes of plastic – equivalent to the weight of 50 London buses – in the UK each year.

Elvive bottles would “never be comprised of virgin plastic”, it said, adding it would redesign the packaging, dedicating one third of the labels to “clearer recycling instructions”.

Metal labelling has also been removed from the range to aid the recycling process.

It comes as the supplier unveiled a set of sustainability targets in June, which it called its L’Oréal for the Future programme. It includes targets to improve packaging, fight climate change, preserve biodiversity and sustain water management by 2030.

L’Oréal UK MD Vismay Sharma said these ambitions were “to empower those across our value chain – both consumers and suppliers – to reduce their own environmental footprints too”.