What the Russian export ban means for UK food and drink

One week after Vladimir Putin closed the door on many foreign food imports, UK suppliers - and their counterparts across the globe - are wondering what the cost will be to their businesses.

The year-long ban on products such as meat, veg, milk, cheese and fish from the EU, US, Canada, Australia and Norway is unlikely to have a direct effect on the majority of British suppliers, as the UK exports only limited quantities of the outlawed products to Russia. According the FDF, UK food exports to Russia in 2013 were £97m - less than 1% of the UK’s £12.4bn total food exports. Exports of the products now banned by Russia were worth less than £39m (see table).

The Scottish fish industry is an exception, as the UK last year supplied £16m of mackerel to Russia, the majority caught by the Scottish pelagic fleet.

Industry body Seafish says the consequence of a reduced market for the fish will mean more is consigned for fish meal and oil, adding that Japan, China and the rest of South East Asia may become targets for exports of Scottish mackerel.

But the knock-on effect of the sanctions will reach far wider. As suppliers seek new buyers for produce they can no longer send to Russia, the price of dairy, meat and fruit & veg may fall - temporarily at least. While retail buyers - and possibly shoppers - are set to benefit, it is bad news for suppliers in markets already under pressure.

NFU deputy director general Martin Haworth warns there is “every likelihood” the ban could affect produce prices. “It comes when most farm prices in the UK have already seen significant falls over the past year,” he says, adding that when Russia banned imports of EU fruit and vegetables during the 2011 German E.coli outbreak, retailers were tempted by low-cost EU imports and put UK growers under pressure to match “unsustainable” prices. 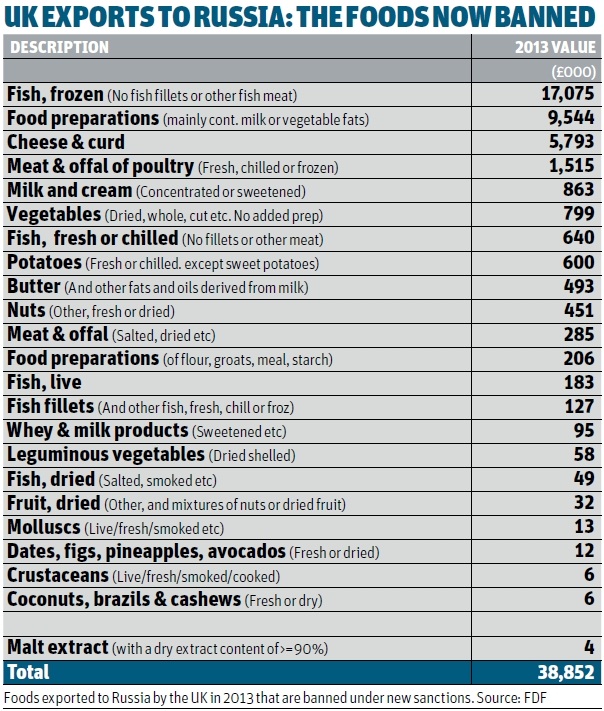 This time, dairy is set to be one of the first in the firing line. Russia is a major importer of EU cheese and butter, and UK dairy prices are expected to fall as they typically follow EU trends. Any drop in price will be a further blow to the British dairy industry, which has gone through a raft of recent price reductions. Trade body Dairy UK says it is liaising with the UK government, the EU and other stakeholders to understand the implications of the Russian ban.

The EU fruit & veg sector is also likely to be hit hard, says Rabobank. The ban comes at a time when favourable weather has already brought oversupply of many types of fresh produce, adds fresh produce analyst Cindy van Rijswick. “Prices of tomatoes, cucumbers, peaches and many other products have been low for a while already because of bumper crops.

EU countries most affected will be those with a strong export focus, such as Poland, Spain and Greece, she says.

Meat is less of a concern. The UK sends no beef, pork or lamb to Russia, though global pork prices could take a short-term hit as Canada - a major supplier to Russia - seeks new buyers.

Across all sectors, price impact will vary, says Mintec data director Brian Smith. “Unrest and uncertainties between Russia and Ukraine have been ongoing and we expect exporters are likely to have minimised their exposure to risk,” he adds.

Further clarity was expected from an EC taskforce this week, which was set to meet on Thursday (14 August) to analyse the potential impact of the ban and how the EU should react. It would “assess how we can effectively provide meaningful support if and where this is needed,” said agriculture commissioner Dacian Ciolos in the run-up to the meeting.

One supplier with experience of trading in Russia says some producers may find ways of getting goods into the country despite the ban. They could potentially send items through neighbouring states; falsify codes used to identify products; or bribe border officials. Smaller companies in particular could find it easy to pass under the radar, he adds, but large, reputable suppliers are unlikely to be tempted by such tactics.

For them, warns Rabo­bank’s van Rijswick, sending any produce to Russia - even that not on the current banned list - could be a risk. “A supplier could find out, by the time it arrives, that the ban has been extended to other products, or have to deal with Russian border officials who interpret the ban differently.”