Can the revamped GBBO with Noel Fielding bring back the buzz into a home baking sector hit by slumping sales?

Surreal, psychedelic and just a little bit rock ‘n’ roll, Noel Fielding was certainly a wildcard in The Great British Bake Off presenter lineup, which is completed by Paul Hollywood, Prue Leith and Sandi Toksvig.

With his bouffant hair, outlandish dress sense and bizarre comedy stylings, he’s a million miles away from Mary, Mel and Sue. But he might be just what home baking needs right now. Value and volume sales are down 3.8% - that’s a loss of £26.8m [Kantar Worldpanel 52 w/e 26 March 2017].

“GBBO’s move to Channel 4 has been a huge topic on the news agenda and the journey for the programme will undoubtedly provide excitement for viewers and the category,” believes Jan McKee, executive head of marketing at Dr Oetker UK. “With consumers baking less over the past year, we’re hoping to see new engagement with baking as the move brings new features and personalities.”

So, what’s behind the decline? Can Noel et al whip up growth for home baking, or is it all about Mary? And what are brands doing to capitalise on this?

Baking fruits, ‘other’ ingredients, such as colours and decorations, and sugar are a key driver behind the decline of the past year, contributing £10m, £8.6m and £5.2m losses, respectively.

“Within these markets we are seeing strong price deflation and consumers purchasing both less per trip and not as often,” notes Kantar analyst Thomas Steel. “Health will also be a factor in this market as consumers are being exposed to more messaging around excess sugar consumption.” 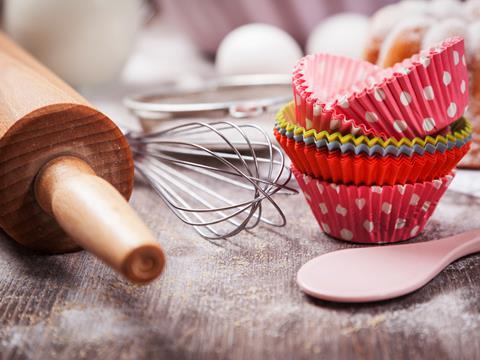 Both brands and own label took a hit with value sales down 4.1% and 3.7% respectively. For own label, this is a significant decline as it’s been growing consistently for the past five years [Kantar]. That’s despite it stealing shelf space from brands. “Home baking brands have been ousted by own-label ranges across all retailers, which has had a detrimental effect on category value,” adds Steele.

Sales in the big four are down, with Asda suffering the biggest decline of 9%, followed by Sainsbury’s at 7.4%. This is dwarfed only by Aldi (-9.8%), whose home baking sales have been growing rapidly for the past few years. In fact, only Lidl, Ocado and M&S saw category growth.

“In larger retailers the average SKU count has fallen by 3%, and in some retailers this is up to 12%,” says McKee. “This is having a negative effect on sales, as retailers that have rationalised most heavily are seeing the biggest declines year on year in both value and volume.”

While both own label and brands are in value decline, there are opposite trends happening when it comes to average price. Own label saw a decrease per pack of 1.6% while brands saw a 3% rise. For brands, this is a result of changes to promotional tactics.

“Overall there are fewer promotions as EDLP has become more important,” explains Danielle Harvey, Cake Décor sales director. “Frequency of baking is often longer than a three-week promo cycle, so many customers miss promotions whereas everyone benefits from EDLP. We have also seen that single product promotions have a big impact, rather than a blanket promotion across all ranges.”

The number of promotions in the home baking aisles of the big four has fallen over the year ending 26 March 2017 by 22% to 2,243 [Brand View]. Notably, the ‘save’ mechanic became more prominent accounting for 54.4% of all promotions, compared with just 37% the year before.

“Promotions are decreasing and the level of sales through promotions are down 16% year on year across the major multiples,” adds Dr Oetker’s McKee.

The number of promotions also fell during the period the Great British Bake Off was on air, widely referred to as the third biggest occasion in home baking. There was a 7.4% decrease in promotions during the 2016 season compared with the 2015 one, with Asda cutting activity by a third.

While the timings for the new season of Bake Off, complete with Noel Fielding, remain unknown, brands are already gearing up to maximise its potential.

“Channel 4 brings new opportunities for brands such as the possibility of advertising, sponsorship and calls to action within the show,” says McKee. “This is an exciting prospect for the category and will help viewers resonate with brands and their relationship with home baking.”

Creating in-store baking events over this period is key, she adds, as brands and retailers can’t rely on the popularity of the programme alone. The same can be said for other key occasions throughout the year. “Christmas and Easter are both ideal times to promote home baking ranges as shoppers will be eager to impress friends and family,” says Helen Touchais, brand director, home baking at Premier Foods. “However, the largest sales peak each year within the baking category is Pancake Day, an opportunity for retailers to use secondary siting and gondola ends to attract light buyers.”

Premier Foods is already in a good position when it comes to Bake Off thanks to its Paul Hollywood baking mixes, which have amassed over £1m in sales since launch at the end of 2015. “In the last few years we’ve seen less innovation in home baking and this has impacted the market,” adds Touchais. “The key to keeping consumers interested is to stock a range of products that meet the needs of varying skill sets. While we know many people still try and make the time to bake from scratch, young adults are often time poor and need a quick and simple solution.” 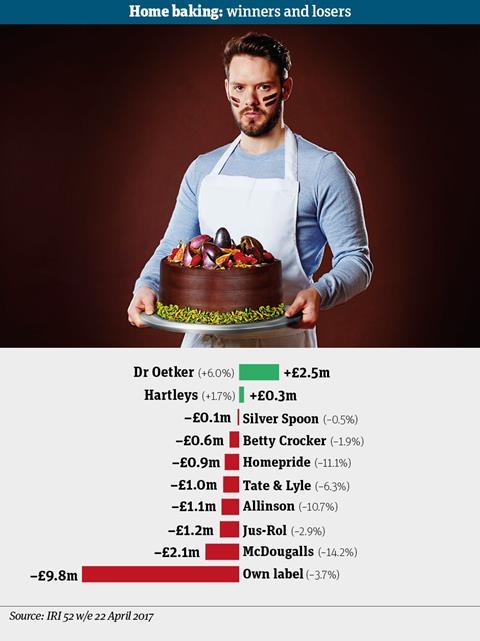 Promos fall when Bake Off off air

Despite Brits’ desire for an easy bake, value sales of sweet cake mixes are down 2.3% to £35m [IRI 52 w/e 22 April 2017]. They’ve not fallen off the radar, though, with numerous piece of NPD hitting the shelves in recent months. These include a trio of Betty Crocker mixes (see Innovations, right), Free And Easy Gluten & Dairy Free Chocolate Brownies Mix, Helen’s Gluten Free Scone Mix and Let’s Celebrate Cake Kits by Delicious Alchemy. Fiddes Payne has also reformulated its Disney range of kids home baking kits to be “more nutritionally balanced” as well as adding new products such as the Moana Adventurous Activity and Frozen Elsa Cupcake Kits.

While contestants aren’t likely to crack out a cake kit on the upcoming series, many of these launches do reflect trends that are gaining attention (and listings) in the home baking aisles, on the show and in social media. Notably, health and indulgence.

“Items gaining most space are those fulfilling a new or different need such as healthier alternatives including protein ball mixes,” explains McKee, “as well as trend-led decorations such as Unicorn Placements and new technique shortcuts like Ready Mirror Glazes and Ready Lemon Zest. We are also seeing increased space for fast growth areas such as Cocoa Powder and Cooking Chocolate.”

Tapping these trends has paid dividends for Dr Oetker, one of only two top 10 home baking brands in value and volume growth, alongside Hartley’s (see IRI data left).

‘Maximalism’ - the opposite of minimalism - is also causing a stir on social media with baked goods taking inspiration from the likes of freakshakes, milkshakes laden with indulgent toppings such as whipped cream, brownies, sprinkles and sauces. This extends beyond cakes to doughnuts topped with whole chocolate bars, marshmallows and even injectable fillings.

“Consumers are still baking, but they are doing so for special occasions and events rather than everyday bakes,” says Geraldine Phillips, marketing director for Noble Foods, a free-range egg supplier. “This suggests a demand for premium and speciality ingredients to maximise baking results.

Health, the opposite of the indulgence cited above, is another key trend at play in home baking. Over the last year we have seen a rise in free-from baking kits as more people choose to live a free-from lifestyle and time-poor consumers search for convenience in home baking,” says The Groovy Food Company founder Rosie Hayward. “The Bake Off is a trendsetter and helped to make healthy ingredients mainstream with the introduction of the alternative ingredients challenge in 2015.”

Even as far back as series 4, the contestants have been tasked with creating vegetable cakes and in 2015 they were tasked with developing sugar-free cakes and thus introducing the nation to new ingredients. With a further £5.2m wiped off sugar sales, it seems the sweet stuff’s woes aren’t over.

“While total sugar has seen a long-term volume decline of 4%, we have recently witnessed growth in premium, unrefined brown sugars as experienced bakers are trading up from white sugars,” notes Tracy Hughes, Silver Spoon marketing director. “While the growth in premium sugars is positive, the gain doesn’t counterbalance the white sugar loss.”

However, this has only had a minor impact on Silver Spoon’s sales - value is down 0.5% on packs down 1.4% [IRI]. The manufacturer has been focusing on alternative sweeteners such as Truvia and the Silver Spoon Agave Syrups, launched in April this year as well. To drive these products in home baking, it’s also relaunching its recipe website BakingMad.com at the end of July.

“Consumers are turning to natural alternatives in sweetening - more so than artificial. We see this evidenced in the rise in stevia-based sweeteners (+4.5% value growth), and in an increase in perceived natural liquid-based product such as agave, honey, and maple,” Hughes adds.

For consumers on a health kick, sugar isn’t the only thing being replaced. “People want to have their cake and eat it too, so Brits are looking for healthier bakes with benefits, made with natural and unrefined ingredients rather than the traditional processed baking staples of butter, white sugar and flour,” adds Hayward. “The demand for alternative baking ingredients has led to a 134% rise since 2010 in the launch of bakery products with non-grain flours.”

And, of course, coconut oil is sticking its claws into home baking, particularly in no-bake foods such as energy balls, bars and snacks with 122k uses of the hashtag #nobake on Instagram.

For those gauging the popularity of the new presenters, social media is where it’s at, believes Premier Foods’ Touchais. She says: “As the new hosts step up to the plate as the programme settles into its new Channel 4 home, we’ll be really interested to see how the social media conversations, in particular, evolve, but we certainly believe that the conversations will be no less passionate about what makes a good or bad bake.”

For now, though, the only thing consumers can do is stare forlornly at the television akin to the way bakers stare at ovens in the tent while they wait for the magic words: ready, set, bake!