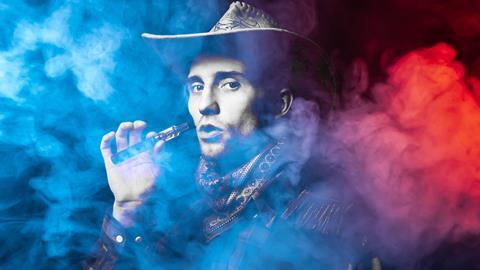 Lockdown has played into the hands of the tobacco giants, whose vape brands have seen soaring sales. So what’s happening here?

Big Tobacco is winning big. And no, that’s not just because the giants are selling more cigarettes and rolling tobacco. They’re also making serious gains in the vaping market.

So why has Big Tobacco cashed in? What does it say about the vaping market? And how are smaller rivals fighting back against the dominance of the major brands?

Essentially, the tobacco giants have been in the right place at the right time. During lockdowns, there has been a major channel shift away from specialist stores, which have been forced to close. These outlets now account for just 20% to in-store spend, says Kantar, down from 41% the previous year.

“As they fell into the category of ‘non-essential’ shops, adult vapers have had to look elsewhere to stock up on e-liquids and devices, turning to trusted local [convenience] shops and supermarkets,” says Lyle Mitchley, reduced risk products and brand portfolio manager of JTI UK.

Supermarkets and convenience store sales growth rose 20.6% to £296.3m, according to Nielsen data on the vaping market – which includes sales through supermarkets and c-stores, and excludes specialists.

Crucially, the channel switch has prompted a change in the types of devices people are buying. While specialist stores tend to sell trendy, open-loop brands, supermarkets and convenience stores are skewed towards closed-loop devices. So these systems have gained more than 10% in value share as the market has shifted [Nielsen]. Luckily for Big Tobacco, they specialise in these off-the-shelf options – and have been primed to cash in.

There’s a reason why supermarket and convenience stores tend to favour closed systems. Open systems are complicated, with countless coils, tanks and battery packs to be considered. One maker’s parts are rarely compatible with another’s and hand-holding is required for new vapers. Store staff would rarely have that expertise – so that’s typically where specialist stores have come in. And they’ve been shut.

John Taylor, chief marketing officer at fellow brand Dinner Lady, points out how important those consultations are. “Traditional products need specialist knowledge to fully support adult smokers in their transition from cigarettes to e-cigarettes and e-liquid.”

Even if shoppers are comfortable buying open systems at their local shop, they are less likely to browse in this environment.

“Many consumers won’t wish to handle products before they buy and may also be inclined not to ask questions at the till to avoid queues building up behind them,” points out Duncan Cunningham, UK corporate affairs director at Imperial Tobacco and Blu.

The same switch to closed loop has happened in online, where 45% of the category’s sales were made last year [Kantar]. “Pod systems are significantly easier for the consumer to use and the retailer to sell, without long consultation periods,” Moden says.

Bestway Wholesale can testify to that, having enjoyed “tremendous growth” in the closed-loop category.

“We have seen a significant move in the past 18 months to closed-pod devices with now a relatively even split in the marketplace,” says Bestway trading director Kenton Burchell. Open and closed systems now hold 45% share each at Bestway, with the other 10% coming from disposables and advanced systems. 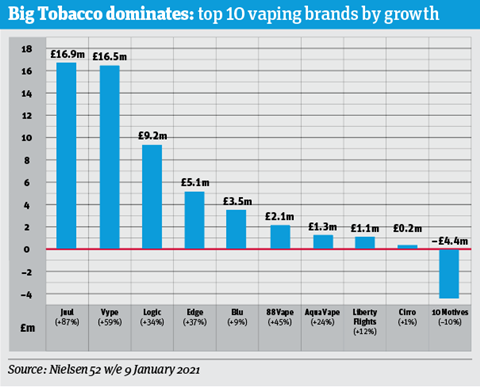 Another reason for the growth in sales of closed-loop systems is the number of people who have quit smoking tobacco. A total of one million people kicked the habit since the pandemic hit Britain, according to Action on Smoking and Health (ASH) – the highest number since records began in 2007 – and in lieu of advice from specialist stores it was the easy option.

But even seasoned open system users are starting to migrate towards closed devices, persuaded by the practicality of not having to carry spare batteries, tanks or coils, “and there’s none of the mess of refilling when out and about”, Dinner Lady’s Taylor explains.

So even specialist vape store suppliers are starting to get in on the closed-loop action, expanding ranges and making experimental flavours more accessible, with Dinner Lady bowing to the inevitable launching its own pre-filled disposable device in January.

“Our focus was on e-liquids for open vaping systems, which is still at the heart of what we’re about. But we identified an emerging need,” says Taylor. Crucially, the brand sees closed loop as a way to make gains in the supermarket space. “They are a great product for the grocery market: simple to stock, simple to sell and simple to use, just unwrap and go.”

It’s far from the only one seeing potential. Last year, Edge launched a closed device that includes a cigarette-like soft tip and crushball options to add to the flavour mix. Liberty Flights got in on the action, too – but rather than creating its own device, it partnered with Vampire Vape to broaden the flavours available for its closed Dot Pro system. “Unified pod platforms make sense; respected brand manufacturers pool their resources and knowledge by sharing a common platform beneficial to the consumer,” says Liberty’s Moden.

That desire to pool knowledge seems to be equally present at vape brands Zeus, Pukka and Anarchist, which recently joined the roster of NZO’s closed system. The move gives them a wide reach – NZO launched in 600 Sainsbury’s stores in November and, from this month, will roll out to Nisa and Costcutter. NZO says the input from open system brands increases its appeal to more experienced vapers.

If successful, these plays for the closed system market can reap serious rewards. See 88Vape, which has enjoyed a 45% increase in sales, significantly driven by its improved closed system selection, available in Poundland, Asda and B&M. The market potential was confirmed by investors, when parent company Supreme this month listed on London Stock Exchange sub-market AIM – a “real endorsement” of its approach, said CEO Sandy Chadha.

The listing shows, despite the very specific pandemic conditions that prompted these buying habits, there is confidence they will last in the long term. Closed system users are expected to remain sticky. Nevertheless, Big Tobacco brands aren’t simply sitting back and enjoying the rewards: they want to cement their gains in vaping.

At BAT, for one, UK & Ireland MD Frederik Svensson says the company has “invested significantly” in closed-loop systems.

It’s not just vaping brands enjoying success with convenient smoking alternatives, of course. PMI has spent billions on its Iqos heated tobacco device, and Tesco and WH Smith became the latest retailers to stock up on its Heets peripherals. While sales of Iqos and other heated tobacco products in the UK lag the likes of Juul and Vype they increased by as much as 270% in 2020, PMI adds.

Similarly JTI is investing in its Ploom heated tobacco product. Last year, it launched sleek device Ploom S, designed to offer “an alternative but familiar tobacco experience”. JTI points to forecasts suggesting there will be nearly one million UK heated tobacco users by 2025.

With figures like these, it may sound like Big Tobacco can do no wrong in this market. But there are some declines. BAT’s ‘cigalike’ brand 10 Motives was the biggest in vaping last year. This year, it’s fallen to fifth place with a £4.4m loss because the ‘cigalike’ subcategory is “heavily declining”, says Nielsen analyst Laszlo Zsom. Instead, BAT stablemate Vype has taken its place as market leader.

And more worryingly for the wider category, there are signs that the entire vaping market could be diminishing. ASH says the number of vaping users dropped by 400,000 in 2020, despite the growth in quitters.

The effect of this, plus the eventual reopening of specialist shops and their wider ranges, may mean Big Tobacco brands find it difficult to repeat the stellar gains made this year.

But it’s important to note it will be tough for specialist stores when they do reopen. “Given adult smokers and existing vapers are now more aware of ranges available in traditional retail, it could be challenging for vape stores to win back some customers,” says John Patterson, sales director at Juul Labs.

So for now, it seems the new normal habits are here to stay. That means the safe bet is on Big Tobacco getting even bigger. 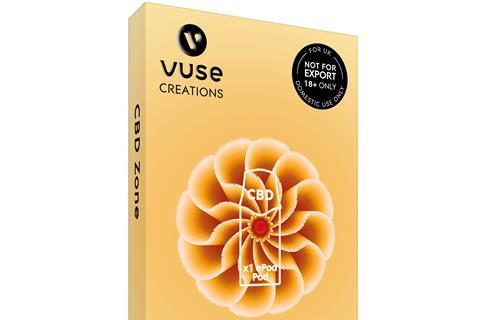 Vuse CBD Zone | Launch date: January 2021 | Manufacturer: BAT | Last month BAT launched its first CBD vaping product (rsp: £9.99 for a flavour pod) on a trial basis to customers in Manchester. The lineup of three flavours joins a growing range of CBD-infused juice options. “CBD vaping is a new category for us and we will be using this pilot launch to gain key learnings about consumer and retailer experiences to help inform plans for a potential nationwide rollout of Vuse CBD Zone later in the year,” says BAT UK & Ireland chief Fredrik Svensson. 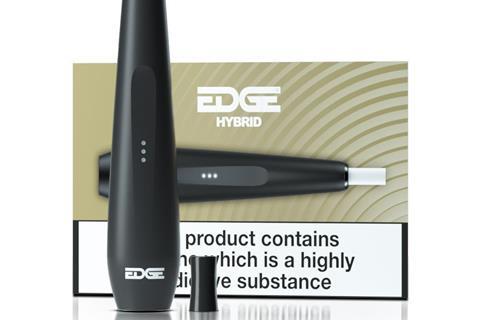 Edge Hybrid | Launch date: July 2020 | Manufacturer: Edge | The Hybrid device takes pod refills in three flavours (menthol, tobacco and blackcurrant). These are placed into the device – it easily splits apart and pops back together with magnets – alongside cigarette-like filter tips. It also allows for menthol ‘crush balls’ to be added (rsp: £25 for a starter kit with three pods and nine crush ball filter tips). 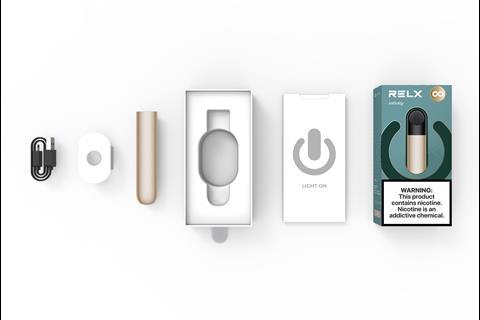 RELX Essential | Launch date: December 2020 | Manufacturer: RELX | Just a month after launching a ‘premium’ range of closed pod devices, RELX has launched an ‘Essential’ line. The colours are just as snazzy but the cost is halved (rsp: £9.90 for a pocket-sized pod device). They are leak resistant, and the brand has also worked hard to reduce the inhalation sound the device makes. 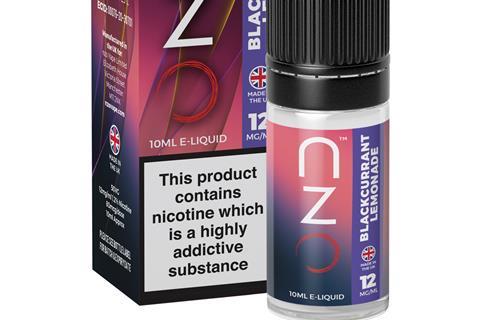 NZO liquids | Launch date: January 2021 | Manufacturer: NZO | NZO has bucked the move away from open systems by launching its own e-liquid. There are 10 flavours available (rsp: £10 for five 10ml), designed specifically to cater for the open-system vaping category. NZO does not have an open system device of its own but the shift to liquids suggests that might not be the case for long.