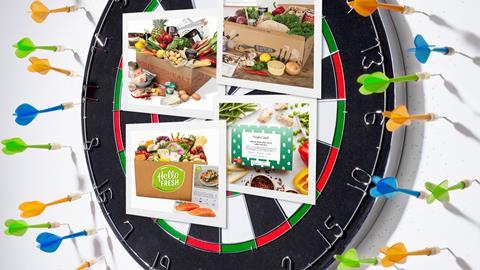 Most of the major mults have reacted to the meal kits challenge with versions of their own. But why can’t they make them work?

HelloFresh must be feeling pretty smug right now. Because after years of struggling to break even - prompting extensive criticism of its business model - it is finally making money. In January, the recipe box group announced it was on track to deliver a global EBITDA of between €45m and €48m for 2019, marking its first full-year profit. Not bad for a business model widely expected to sink under the weight of hefty marketing costs.

It’s a sign of a burgeoning market. HelloFresh rival Gousto reported 70% sales growth in August, while Mindful Chef announced a 178% uplift in January 2019. Organic player Riverford says sales of its recipe boxes are up 20% to 2,500 per week. “We’re making more money than we’ve ever made before,” says MD Rob Haward.

The rapid growth of this small sector - and its inherent challenge to the traditional supermarket model - is capturing the attention of the mults. Tesco, Waitrose, Sainsbury’s, M&S and Co-op have all attempted to bring the benefits of the recipe box into stores with their own meal kits. Yet so far, these attempts have largely fallen flat. So can the recipe box concept work on a shop floor? Why are supermarket meal kits missing the mark, and is anyone getting close to hitting the bullseye?

On paper, the recipe box concept should work in either environment. Convenience and health are two growing priorities for UK ­shoppers, revealed Nielsen’s State of the Nation survey of more than 4,500 consumers in November. By packaging up fresh ingredients with step-by-step instructions for a home-cooked plate of food, meal kits deliver on both fronts. What’s more, six out of 10 shoppers said they would like step-by-step recipes when cooking more adventurous dishes in a Streetbees poll for The Grocer in October.

Yet those sound principles are failing to translate to success for the supermarkets. See the sheer number of failed attempts at an in-store format. Waitrose discontinued the trial of its gourmet Dinner for Tonight meal kits after fewer than six months. Tesco’s boxes, meanwhile, were on shelves for near on two years - but were ultimately scrapped in 2018.

Even partnerships with established players in the recipe box market are shaky. Sainsbury’s trialled HelloFresh meal kits in March 2017, only for them to vanish from shelves by December. Co-op’s click & collect trial with Gousto ended after four months.

“Sauces allow shoppers to create a variety of meals quickly and easily, but also to experiment”

That’s partly because the in-store environment is very different. For one, shoppers can choose exactly what they like from the supermarket aisles, rather than being limited to certain recipes. And if you’re looking for help with scratch cooking, the choice of products is wider than ever. “Today shoppers can pick from an array of meal kits, ready meals, complete nutrition shakes, spice mixes and everything in between,” says Adarsh Sethia, MD of meal kit brand The Spice Tailor.

Even the more traditional cooking sauce format is gaining ground, up £8.5m thanks entirely to volume gains. Shoppers see sauces as an “opportunity to create a variety of meals quickly and easily, but also to experiment and add their own flair”, says Maria Chong, MD for Europe at Lee Kum Kee.

When pitted against all those options - which allow for an element of customisation - an in-store meal kit can feel overly rigid. Plus, the format lacks the one major thing that attracts customers to the likes of HelloFresh and Gousto: the ultimate convenience of home delivery. Placing recipe boxes in a supermarket setting “feels like it’s missing the point of what attracts people to us”, says Riverford’s Haward.

Bryan Roberts, global insight director at TCC Global, has a similar take. “Often recipe boxes include ingredients that the consumer wouldn’t choose for themselves, but they’re willing to make that compromise for the convenience of having it delivered to their doorstep,” he explains. “If shoppers are going to make the effort to visit a supermarket, they’re unlikely to pay a premium for a restricted collection someone else has picked out.”

The issue of premiums is a crucial point. Because in-store meal kits generally don’t come cheap. Waitrose charged £12 for its Dinner for Tonight meal kits, which included enough food for two. The two-person HelloFresh meal kits came in at £10 in Sainsbury’s, and Tesco’s boxes were cheapest at £8. Although that may compare well with the online players such as HelloFresh, which charges £5.83 per portion on a standard two-person plan, stores offer an array of cheaper, separate options.

Some retailers are making a high price point work. Take M&S, which unveiled a five-strong In the Bag range at a minimum price of £8 across six stores last February. The trial was extended to 50 stores in June, which suggests positive results. TCC Global’s Roberts believes it stands a chance. “M&S tends to have a lot more ‘for tonight’ shoppers rather than the big weekly shop, which makes sales of recipe boxes far more likely,” he says.

But other meal kit propositions are looking to remove barriers to entry such as cost. Recipe brand Scratch, for example, comes at a lower price of just £5.99 for a kit of prepared ingredients like chopped veg, raw diced chicken and cooked rice. And it’s reaping the rewards. “Over the past five years our sales have doubled,” says MD Phil Pinnell.

Meanwhile, Simply Cook is looking to tempt shoppers with more flexibility. The DTC meal kit brand rolled into 300 Tesco Express branches in November, and made its debut in standard stores earlier in February. The kits include three flavour pots of ingredients, a recipe card, and a shopping list of fresh ingredients.

Sam Tierney, MD of the brand’s retail division, says the less rigid nature of the kits is a major pull. “Shoppers can choose to adapt the dish for any dietary need, lifestyle or taste preference, and they can also trade up into organic or premium ingredients, which increases basket spend,” he says.

“Shoppers can choose to adapt the dish for any dietary need, lifestyle or taste preference”

Waitrose has taken a similar strategy. After scrapping its Dinner for Tonight boxes, in 2018 the retailer launched its Beautifully Simple campaign, which groups ingredients and recipes together on one shelf. The campaign is currently paused, but a Waitrose spokeswoman says it has “been successful with customers” over the past 12 to 18 months.

Susie Stannard, consumer insight manager at AHDB, believes the Waitrose and SimplyCook model is likely to be the most successful twist on the recipe box format. “They’re both a great compromise on that concept,” she says. “Flavour kits allow shoppers more flexibility and control over what they’re cooking and when. In comparison, recipe boxes are quite restrictive.”

So perhaps the best way for retailers to get in on recipe boxes is not by copying the format - but by thinking outside the box.

The hits and misses of retailer meal kits 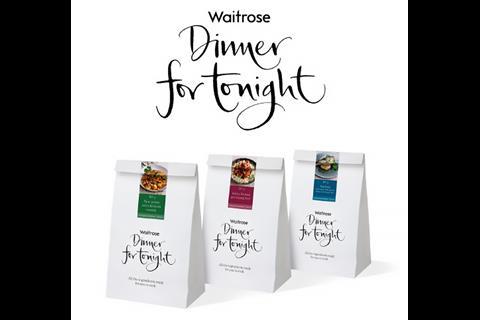 Waitrose Dinner for Tonight Launch date: October 2016 Status: Discontinued These premium bags, which made a meal for two for between £8 and £12, only lasted around six months on shelves. According to MD Rob Collins, Waitrose abandoned the trial to focus on providing meal suggestions in its fish and meat counters – a format he believes is a better fit for the in-store environment. 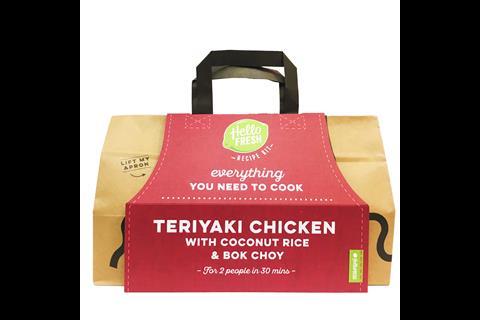 Sainsbury’s HelloFresh Go Launch date: March 2017 Status: Discontinued Sainsbury's declined to comment on why HelloFresh Go meal kits disappeared from its shelves in December 2017. Initially available in stores across London and the south east before rolling out online in July, the five-strong range served two people for £10, and recipes changed every six weeks to “give variation”. 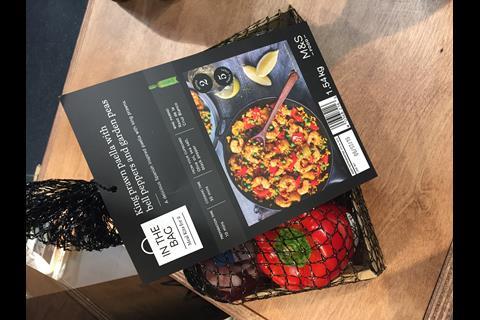 M&S In The Bag Launch date: February 2018 Status: Ongoing M&S initially tested out these premium recipe kits, which offer meat, fish and vegetarian options alongside a suggested wine pairing, in just six stores. The trial expanded to 50 branches in June. Prices start at £8 for the dishes, which include king prawn paella and sirloin steak with a mushroom risotto. 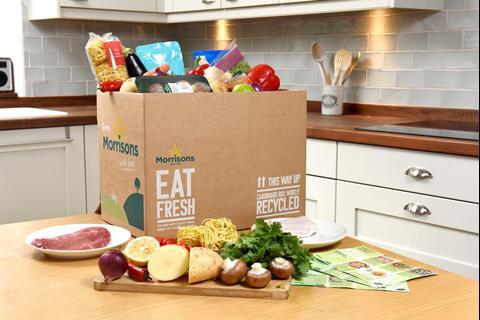 Morrisons Eat Fresh Launch date: September 2018 Status: Ongoing Morrisons is looking to undercut the recipe box giants with its online-only Eat Fresh service. At £25 for three meals that serve two people, it is cheaper than HelloFresh and Gousto by roughly a fiver. Recipes are changed regularly online and range from Asian Style Hake Fishcakes to Aubergine Curry, with each dish taking 30 minutes or fewer to cook. Eat Fresh is now the only retailer-operated online recipe box service, following the suspension of Waitrose Cook Well last January.