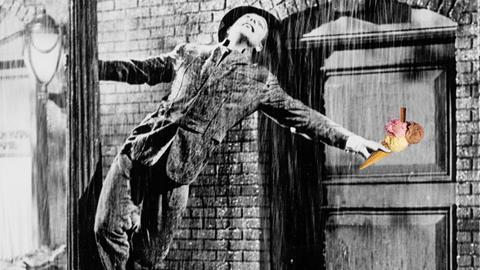 Last summer was a washout. But ice cream brands are beating the weatherman with premium propositions and on-trend innovation

What a glorious feeling! Right now, the UK’s ice cream makers are laughing at clouds so dark up above - to paraphrase a certain classic song by Gene Kelly. And the reason the sun’s in their hearts is simple.

So, what has got the category singin’ in the rain? And how has it avoided falling into a post-heatwave malaise?

It would be wrong to suggest the weather had no impact at all. Overall, consumers bought 7.9 million fewer litres of ice cream last year, a decline of 2.1%.

However, it’s not all about how much you sell. It’s also what you sell that matters. Brands managed to mitigate the volume decline with a 3.1% increase in average price per litre, which meant they still mustered a 0.8% value increase to £671.5m. By contrast, own-label ice cream - which had no change in price - slumped 2.1% to £423.3m.

Brands have managed to gain an edge over own label by capitalising on consumer appetite for higher-end fare, suggests Josh Lee, co-founder of premium brand Northern Bloc. “The consumers wanting more premium products are willing to pay, as long as the ice cream delivers on taste, is interesting and ethically sourced,” he says. “While many own-label options look the part in packaging, they are low-cost alternatives that don’t always deliver on taste.”

“While many own-label options look the part in packaging, they don’t always deliver on taste”

There’s no better illustration of his point than plant-based options. In this area, brands have reaped the rewards of being at the forefront of the trend. Not only are vegan options typically pricier than standard ice cream, they are also helping to buoy volumes.

Take Ben & Jerry’s. It mustered the highest gain of the top 10 ice cream brands - up £2.7m to £110.2m [Nielsen 52 w/e 26 January 2020] - following the launch of dairy-free tubs like September’s Cookie Dough. That it is priced about 15% higher than regular tubs doesn’t seem to have deterred shoppers.

“The big trends are where consumers are looking for better-for-you options, and we’ve responded to that with some of the launches you’ve seen in terms of vegan options from Ben & Jerry’s,” says Unilever VP for ice cream Andre Burger. “This Veganuary, sales have gone through the roof.”

Halo Top is similarly cashing in on the vegan trend. In August, it introduced three plant-based ice creams to the UK, which helped the brand deliver a 5.5% value increase to £22.3m [Nielsen].

This success is inspiring others to get involved. Froneri has just launched a standalone vegan brand in the form of Røar, “an indulgent plant-based ice cream aimed at consumers who are looking to indulge while still making responsible food choices”. Having hit Ocado in January, the three-strong range of tubs will roll out in Tesco from 16 March.

Even smaller brands are taking the plunge. In October, oat milk supplier Oatly gave Alpro ice cream a run for its money with the rollout of a trio of tubs. And in April, Holland & Barrett upped the innovation stakes among retailers with three 340g vegan ice creams.

Vegan isn’t the only way to command a price premium, though. There has also been growth in snackable formats, which tend to command a higher price per litre. Unilever is capitalising on that premium with its Magnum brand. Its Mini format is priced about 24% higher per 100ml in the mults than its standard sharing tub.

Burger says these smaller formats play to consumer demands. “People are on the go more often, so where we see family dessert tubs not doing as well, snacking is an area of growth,” he says.

That insight has inspired others to shrink their packs. Mackie’s of Scotland, for one, is set to roll out a duo of mini tubs in Original and Honeycomb flavours in March. “A key trend is portion control and products in snack size, the driver behind our Mini Collection,” says sales director Stuart Common.

“People are on the go more often, so we see snacking as an area of growth”

Little Moons is also taking advantage of the trend with its Japanese-style mochi and cookie dough-coated balls.

“Our consumer insight shows that people are as inclined to reach for a bite-sized, snackable treat of ice cream as they are a chocolate biscuit or their daily treat,” says co-founder Howard Wong.

So confident is the brand in its proposition that it is to open a new £3.5m factory in Park Royal, London, to “meet the current demand from trade customers and retailers globally”.

Arguably, these premium trends could not have come at a better time. Because there are whispers of the biggest ice cream craze of late - lower calorie - starting to cool off.

Although pioneer Halo Top is still growing, its £1.2m increase represents a marked slowdown on last year, when it amassed £21m from a near-standing start. And the October launch of its Platinum Series, which is more akin to traditional ice cream in its nutritional content, could be taken as an admission that low-cal isn’t the cash cow it once was.

Crucially, Froneri customer marketing controller Henry Craven points out that “consumers are still looking to indulge” when it comes to ice cream. That leaves healthy brands in a tricky position. “Healthy ice cream saw strong initial growth on the back of a high number of new brand entrants, but we’re now beginning to see this sector struggling to maintain its early success,” he says.

Breyer’s owner Unilever admits the healthier side of the ice cream category is waning. “We’ve seen it shrink,” says Burger. “Not every product that entered this segment has delivered on taste, so I think it had an initial high trial, but not every brand has seen a high repeat.”

Speakeasy co-founder Jane Woodhead tells a similar story. “While brands have been evolving to reduce calories, this has often come at a compromise of quality, flavour or texture,” she argues.

However, not everyone is seeing a slowdown. Häagen-Dazs says its 150 Calorie Gelato Collection has amassed more than £3m since its launch in February and attracted new customers to the brand.

The secret to success is that it “provides shoppers with a lower-calorie option, while tapping into the desire for truly decadent ice cream, bridging the gap between the two,” says Kat Jones, marketing manager for ice cream & snacking at General Mills. In essence, it has focused on getting the taste credentials right.

For him, taste is paramount. “There will always be a consumer in healthy ice cream who isn’t willing to compromise on taste, and as more players enter the market with low-calorie options, taste will become ever-more important versus the calorie number on the front of the pack,” he says.

Still, it’s not just what’s on the front of the pack that’s concerning consumers. Shoppers are paying more attention to the entirety of the pack, thanks to growing concerns over the environment. That has inspired the next big trend in ice cream: eco-friendly packaging.

Ben & Jerry’s, for instance, is working to remove all single-use plastic from its packaging by the end of 2020, replacing it with biodegradable or compostable alternatives. It’s already ditched the standard plastic moisture barrier in its 465ml paper tubs, swapping it for a bio-polyethylene alternative.

It says the change, announced in December, will save 40 tonnes of plastic every year and make the packaging a lot easier to recycle.

Smaller brand Northern Bloc followed suit in January, lining its paper tubs with BioPBS, a material made from sugar cane, to make them “fully recyclable within mixed recycling at home”. More such moves are set to follow: Häagen-Dazs will ditch the plastic spoon from its mini cup multipacks in March.

Mochi brand Little Moons is going one step further. It is in talks with retailers about opening an in-store ice cream parlour, in which shoppers will be able to bring their own reusable containers to pick ‘n’ mix their favourite flavours. That will result in a 97% reduction in packaging waste, Little Moons says.

All such efforts are laudable. But not all succeed - not even ones by suppliers as large and eco-minded as Unilever. Take its wrapper-free Solero multipacks, hailed by Unilever as the first ice cream packaging of its kind when it launched to much fanfare last June. At the time, the giant said the innovation would cut plastic use by 35%.

Earlier in February, The Grocer reported Unilever was discontinuing the trial. That’s because it “wasn’t the most sustainable way to solve the issue” according to Burger. “Unfortunately it wasn’t scalable from a commercial point of view,” he added.

Because if one thing is clear from this year, it’s that virtuous propositions aren’t enough on their own. To beat the weatherman, they need to make commercial sense too. 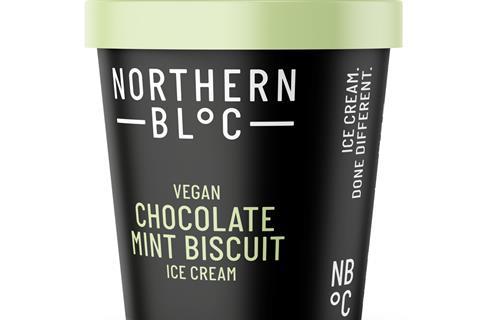 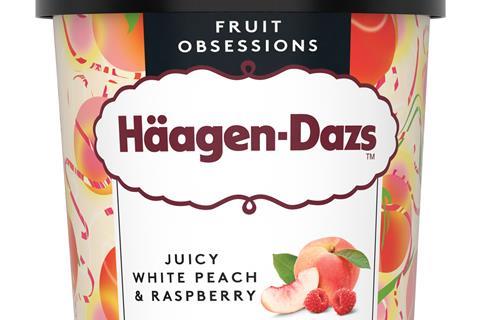 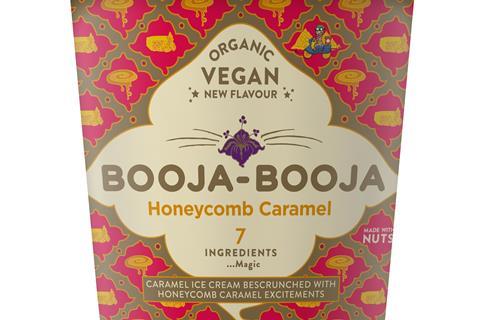 Booja Booja Honeycomb Caramel | Launch date: February 2020 | Manufacturer: Booja Booja | The latest plant-based treat from vegan confectioner Booja Booja is made from cashews, with pieces of crunchy honeycomb (rsp: £5.49/500ml). It’s one of two ice cream launches by the brand – the other being the mint & chocolate Heavens on Earth. They come with a refreshed tub design that sees vegan messaging take centre stage. 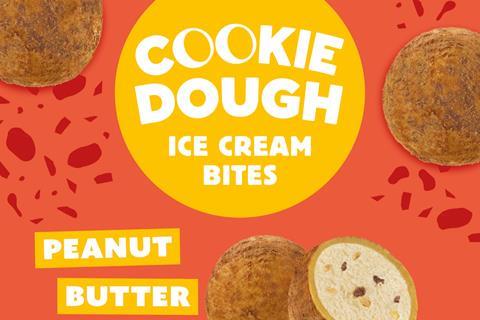