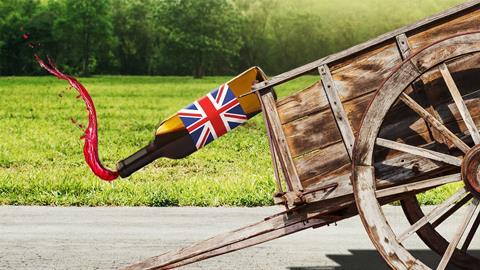 Brits are turning to booze in lockdown. But sales of low & no drinks are still on the up – so what’s motivating shoppers?

You can’t blame Brits for turning to booze. Society has changed beyond recognition in the space of a month. The news is a rolling cycle of doom. Simply going outside can incur a fine. To make matters worse, you can’t even visit your local to drown your sorrows.

So it’s no surprise shoppers are filling their trolleys with alcoholic drinks. In the third week of March, sales of beer, wine and spirits in the mults were up 67% compared with the same period the year before [Nielsen]. It seems moderation has gone out of the window along with normal life.

Theoretically, it should be a tough environment for low & no-alcohol drinks. Yet one of the industry’s most pervasive trends is still going strong. That’s right: despite the fact Brits are all but confined to their homes amid a global crisis, sales of low & no-alcohol drinks are still on the up. Indeed, as Brits stocked up on the hard stuff in the third week of March, low & no sales also saw a 32.5% uplift [Nielsen].

Although it’s behind the sales growth of alcoholic drinks, it’s still an acceleration of pace for the category, which saw a 13.4% gain to £143m over the full year period [Kantar 52 w/e 26 January 2020]. So what’s going on here? And how does this fit into the wider context for low & no?

The rise of low & no in recent weeks is a sign of the national mindset. Although booze sales are skyrocketing, let’s not forget that a sizeable proportion of spend has transferred from the out-of-home arena. Even if Brits are drinking more than usual, they haven’t completely abandoned their aspirations of a healthy lifestyle.

“We are speaking to people who are working from home and getting healthier because they’re doing things like yoga, eating healthier, but perhaps hitting the bottle too much and turning to low & no - there is a massive opportunity,” says Alex Carlton, founder of zero-proof spirits brand Stryyk.

It’s an opportunity that was growing well before the coronavirus changed our national behaviour. Over the past couple of years, low & no has grown from a much-maligned niche into a category that justifies serious space in the likes of Tesco. In the past year, sales have grown £17.2m [Kantar]. Admittedly this isn’t a huge increase when placed in the context of mainstream fmcg - after all, there are individual beer brands who rake in more than that on a yearly basis. But the percentage rate of growth is astonishing. Low & no-alcohol beers, cider and spirits were up 40%, 28% and 112% respectively in Kantar figures. Which is not to be sniffed at.

“The category is in its infancy and its scale is unprecedented when you think about where we could be in five to 10 years if people continue to moderate their lifestyles,” says Carlton.

Key to this success, he says, is its relatively recent breadth in appeal to go beyond teetotallers. “It’s like people have become flexitarians - people now understand the benefits of having a daily product that fits into their rituals without excess.”

Then there’s the health angle. “Low & no-alcohol products generally have lower levels of fat and as a result are increasingly favoured because they don’t compromise the aspiration for wellbeing, fitness, and body-beauty by which millennials and generation Y judge themselves and others,” adds Alex Gordon, CEO of cultural insight firm Sign Salad.

Finally, let’s not forget that it’s cheaper than full-strength booze (most of the time). “While the price of a pint of beer or a shot has risen, salaries have either plateaued or declined. Thus, a round of beers is a significant investment for younger consumers, whereas a round of low & no-alcohol drinks is more affordable,” Gordon says.

In beer and cider, at least, it’s booze-free versions of the premium brands that are making the most progress. The undeniably mainstream Beck’s Blue is still the market leader, with value sales of £16.6m, but its sales are declining at 6% as competitors such as Heineken and Peroni raise the stakes [Nielsen 52 w/e 25 January 2020].

Indeed, Heineken 0.0% was the fastest-growing drink in the entire low & no category last year, shooting up £6.3m to £14.5m. Peroni’s alcohol-free Libera beer, meanwhile, was the second fastest, adding £3.3m in its first full year of trading.

Craft brewers are getting in on it too. BrewDog, notably, has boosted its alcohol-free range with a 0% version of its bestselling Punk IPA - which after just months on the market is already the 10th best-selling low & no beer, with sales of £1.7m [Nielsen].

Smaller independents are also churning out exciting NPD - the likes of Big Drop Brewing and Infinite Session, for instance. However, there is a note of caution here: most are yet to make a serious financial dent.

“It will be interesting to see whether any craft brands manage to make a splash as for now shoppers are flocking to more recognisable brands - especially as we are also seeing the big four really manage to capitalise on the trend by utilising promotions,” says Kantar analyst Rhiannon Hinton.

Plus, low & no-alcohol beers “can easily be stocked alongside their alcoholic counterparts”, says Budweiser Brewing Group’s head of category management Sunny Mirpuri. Which lends itself particularly well to spin-offs from the big names.

Of course, what works in beer doesn’t necessarily translate to other areas of the market. Over in spirits, the picture is very different. Rather than mimicking their branded counterparts, newcomers like Seedlip and Ceder’s are positioning themselves as a new breed of botanical distillate.

So far it seems to be working. The two brands (owned respectively by Diageo and Pernod Ricard) account for the top five best-selling SKUs in the subcategory. Seedlip’s Grove 42 is leading the pack, having quadrupled sales to £2.4m [Nielsen].

That’s despite unashamedly high prices: at the time of writing, a bottle of Seedlip Grove 42 was £22 in Waitrose. Interviewed by The Grocer late last year, Seedlip’s founder Ben Branson said he didn’t need to justify that price. “We need to educate rather than it be about justification. I can tell you that it costs more to make a bottle of Seedlip or [sister brand] Aecorn than most alcoholic products on the market,” he said.

In fact, he went so far as to suggest that lower-priced, newer entrants to the market were “a concern for the consumer”. “It’s a fragile category and we want people to have the best experience possible,” he argued.

Stryyk’s Carlton agrees on the need for quality. But for him, that isn’t confined to the Seedlip way of doing things. He believes there’s room for brands such as his, which aim to “mirror” full-strength tipples. “We keep iterating our ingredients and recipe to get closer to the spirits,” he says. The omens are good: Stryyk has sealed a deal to launch into a major mult over the coming weeks, and the brand’s ‘Not Gin’ is already the 10th best-selling non-alcoholic spirit on the market without any supermarket presence [Nielsen].

Pernod Ricard is another player diverging from the tried-and-tested Seedlip proposition. The Beefeater owner is venturing into relatively unknown territory for the low & no category: dark spirits. It launched the 0% Celtic Soul last year, claiming the category lacked “a compelling dark spirits offering” at the time. It’s currently the eighth-highest selling non-alcoholic spirit with value sales of £168k [Nielsen].

Scotch giant Whyte & Mackay, too, attempted to crack the puzzle, but without removing booze from the equation altogether. In 2019 it claimed an industry first with Whyte & Mackay Light, a 21.5% abv spirit drink aimed at whisky fans who are seeking a lighter tipple.

So it seems opportunity can come in many forms. But amid all this growth, there’s a wine-shaped elephant in the room. Low & no wine was the only part of category to see a decline. Its 6% drop - equating to £4.5m - seems far more than a marginal blip.

For Kingsland Drinks head of marketing and product management Jo Taylorson, that’s down to taste. “One of the biggest challenges facing wine in alcohol-free terms is that it is a more difficult product to make in a way that replicates the taste profile of standard wine,” she says.

However, Dan Harwood, head of wine education at Eisberg owner Halewood Wines & Spirits, says this decline is largely thanks to the ‘low’ portion of the market (wines up to 5.5% abv) rather than the ‘no’.

“Wine drinkers would rather choose to swap out their alcohol completely for a few nights a week than compromise with a low-alcohol alternative,” he says.

The figures back up his point. Because completely alcohol-free versions of big brands are, slowly but surely, gaining traction. Hardys and Lindeman’s, for instance, both debuted in the category last year and pulled in respective gains of £598k and £500k [Nielsen].

The same is true of sparkling wines: Nosecco Edizione Speciale and Freixenet’s 0.0% prosecco both racked up strong £1.2m gains to hit £2m and £1.6m respectively. In fact, they were the two fastest-rising low & no wines last year.

Other players are going the opposite way. Yellow Tail, for instance, is rolling out lower-alcohol wines at a higher abv of around 8.5%. Its ‘Pure Bright’ pinot grigio rolled out into Tesco in the autumn, as the brand announced it had developed a four-strong range spanning sauvignon blanc, chardonnay and rosé SKUs which were “being investigated for launch” in numerous markets. Pierre Chavin is doing something similar.

As the UK social distancing measures continue, consumers may just appreciate that extra abv. But for the moment, the thirst for lower proofs shows no sign of abating. So here’s to a lockdown of moderation.

William Reed - the publisher of The Grocer - has launched an exhibition exclusively for the low & non-alcoholic drinks sector. For more information visit low2nobev.com. 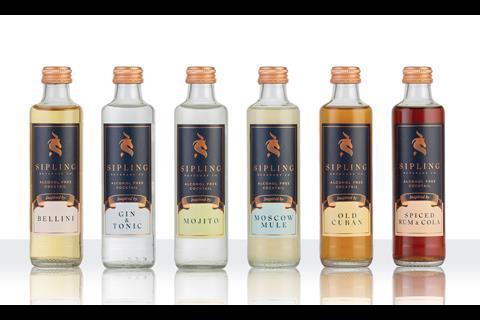 ipling Launch date: October 2019 Manufacturer: Sipling Beverage Co Sipling Beverage Co is betting on shoppers’ enthusiasm for low and non-alcoholic spirits filtering through into their on-the-go purchases: hence this six-strong range of pre-mixed cocktails. The brand claims the sextet “recreate the sophisticated flavours” of the UK’s favourite cocktails without the bite (rsp: £2.50/250ml). 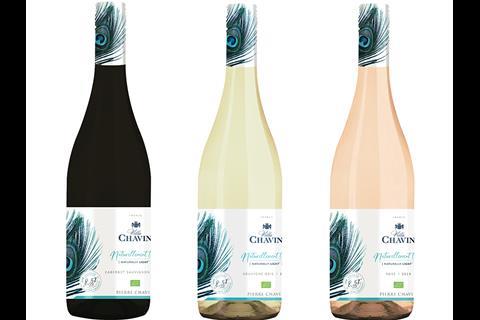 Villa Chavin Launch date: April 2020 Manufacturer: Pierre Chavin These wines, billed as the world’s first fully organic, naturally low-alcohol wine range, are 8.5% abv. Purists might not consider this particularly low (and certainly not no). But launches like this are emblematic of how wine brands are appealing to the taste for moderation without removing booze completely. One to watch. 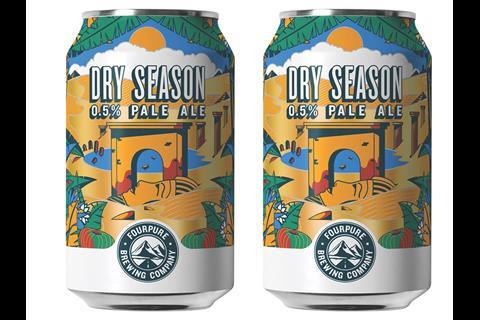 Dry Season Launch date: April 2020 Manufacturer: Fourpure Brewing Company Big brands might be dominating our Nielsen rankings, but that doesn’t mean the UK’s craft brewers are sitting idly by as the low & no movement grows. This 0.5% pale ale from Bermondsey’s Fourpure marks the brewer’s debut in the category in the off-trade, after a solid reception in the on-trade. Dry Season is billed as having “a lighter body but plenty of flavour” along with “light bitterness and flavours of passionfruit, peach and orange” (rsp: TBC). 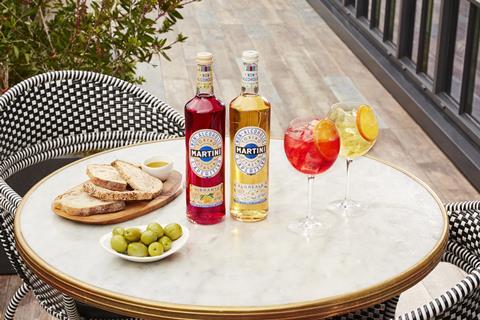 Martini Non-Alcoholic Launch date: February 2020 Manufacturer: Bacardi Brits went absolutely nuts for Italian style ‘aperitivo’ drinks last year, and Bacardi is hoping these two extensions to its popular Martini brand - Vibrante and Floreale - will open the category up to those who want the occasion but not the hangover. The duo are made with the same wines as their alcoholic counterparts (rsp: £10/75cl).