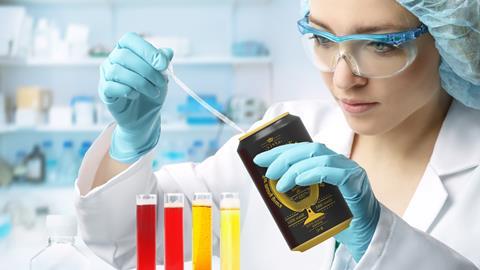 Beer and cider brands need to innovate to keep up with a new, more adventurous crowd

Brits are a bloody impatient lot. Well, at least when it comes to booze: UK supermarket shelves are filling with a huge variety of weird and wonderful flavoured ciders and beer brand extensions in all shapes and sizes, as suppliers try to keep increasingly fickle drinkers interested.

Indeed, the outlook for the category is extremely positive after the scorching summer of 2018 and the World Cup: combined sales of lager, ale, stout and cider have grown a massive £185m to hit £3.4bn. That’s an extra 47 million litres [Kantar 52 w/e 24 February 2019].

But a new, younger generation of shoppers, with a taste for experimentation and no long-standing loyalty to big brands, has come of age. They’re bringing new shopping habits, new palates and new approaches to alcohol consumption. And trying to keep them happy is changing the way brands and retailers approach the category. Fast.

So what exactly are the next generation of booze shoppers looking for?

First things first: NPD has become more important than ever. “You’ve got this Gen Z, millennial population that has access to information here and now - everything is shared within an instant,” says Kopparberg head of marketing Rob Salvesen. “This has had a huge impact - product lifecycles are much shorter than they were, because if you come out with something, people will share instantly if they don’t like it.”

Indeed, Darryl Hinksman, head of business development at Westons Cider, says NPD is “absolutely huge” in terms of value growth. “Over the past year 40% of our growth has come from products launched in the past few years, and we see that as set to continue,” he says. “NPD comes and goes very quickly but if you can land it with impact it can totally transform the performance of a category.”

This is certainly most visible in cider, where fruity variants and flavours have become the dominant force in the category. There are now 1.2 million more fruit cider shoppers than apple cider shoppers, according to Kantar.

What’s more, while many shoppers are switching from apple to fruit, a significant portion of fruit cider shoppers are new to the category. And they’re bringing with them a brand new set of demands.

“It has brought a completely different type of drinker into the category, who is much younger and largely female,” says Westons head of marketing Sally McKinnon. “This has created a sweeter palate and lowered the average abv.”

Much of the recent NPD has been trying to ape the monumental success of Strongbow Dark Fruit. Heineken’s flavoured cider grew its sales by £37.9m to £136.6m over the past year, meaning it’s now almost as large as the £166.4m value of Strongbow Original [Nielsen].

In fact, the drink is so popular it even has a growing subset of fans who have had tins of Dark Fruit and Dark Fruit logos tattooed on them. The Dark Fruit fandom was recently heralded by Vice magazine as a “genuine community” that had “sprung up seemingly without the manufacturers doing much of anything at all”.

No wonder Heineken’s peers are looking to get in on the action with their own dark and fruity NPD. Westons’ Stowford Press Mixed Berries rolled out in 440ml cans in October 2018. Hinksman says it is already “the most successful launch in Westons’ history”. Kopparberg, meanwhile, launched its own ‘Black’ canned cider into Morrisons and Asda in the spring, with an eye to offering a marginally more premium drink than Strongbow.

“We are not trying to win on price versus the likes of Strongbow,” says Kopparberg’s Salvesen. “There is absolutely a place to play in terms of looking at this category and premiumising it.”

Kantar analyst Andrew Curtis says fruit cider has “disrupted” the market just like flavoured gin has spirits. “It has gone from being a disruptor to a main player.”

Thus even the posh apple ciders, which are by no means losing out - both Westons and Thatchers pulled in record sales this year regardless - are launching a slew of weird and wonderful flavoured NPD. Thatchers, for instance, has launched a canned 4% Rosé Cider, while Westons brought its ‘super-premium’ Mortimers Orchard brand into the off-trade in June.

Cider brands are changing the way they communicate, too. “We are seeing cider brands increasingly tap the language, packaging and positioning of wine and beer brands to attract new customers,” says Leyton Hardwick, founder and creative director of brand agency Drink Works.

The problem with all this NPD, though, is that retailers end up playing something of a balancing act.

“The biggest challenge for the retailers is the huge amount of consolidation on shelf,” says Hinksman. “They are looking to reduce space by about 20% to 30% across the board, when at the same time they need to balance big leading brands with innovation.”

So launches that don’t quickly pull in sales can end up on the cutting room floor as quickly as they were conceived. Kopparberg’s Crafted Warning drinks and Smirnoff’s spin-off ciders, for instance, lost the bulk of their listings over the past month.

Kopparberg said the brand could never achieve a profitable rate of sale because craft drinkers showed no brand loyalty and were more interested in trying lots of different things.

What’s the key to creating new drinks that work, then? Molson Coors’ off-trade sales director Alpesh Mistry says having an “anchor brand” helps instil a sense of trust and generate interest. Its recently launched Pip & Wild duo of ‘lighter’ flavoured ciders, for instance, has ‘crafted by Aspall’ on its neck tags.

“Anchor brands are really important for access to the category,” says Mistry. “Aspall is a great example because it gives [Pip & Wild] the halo of the premium cider category. It gives you the element of trust.”

In beer, Molson Coors is doing the same thing with its newest lager, Pravha, technically a brand extension for the long-standing Staropramen brand, which is billed as being ‘brought to you’ by the older, bigger brand.

Beer is generally a harder ask than cider, though. Discounting craft beer, which thrives on innovation, there’s arguably less scope for the big boys to play around with flavours and more extreme styles. For that reason, many of the big brewers are innovating through different packaging and formats instead.

Meanwhile, Budweiser Brewing Co is tapping the health trend with lower-calorie beer Michelob Ultra, which launched in the UK before Christmas in slimmer cans than typical brews. Brewed to an abv of 3.5%, Budweiser Brewing Co head of trade marketing Sharon Palmer says the beer will “complement a balanced, active and social lifestyle”.

If the success of Bud Light (which has racked up almost £40m in value sales since its 2017 launch) is anything to go by, the business formerly known as AB InBev could be on to a winning formula.

But with the impact of the scorching summer and the World Cup, gaining sales was a relatively easy feat for the major brewers in 2018. It’s likely big beer’s biggest challenge for the coming year will be matching those figures.

That includes brews such as Marston’s Shipyard IPA, whose sales have surged 80.9% to £5.3m, or brands that are bringing a fresh approach to a well-known name, such as Doom Bar.

The Cornish ale brand grew by almost a third (29.6%) to £27.6m, making it the UK’s fastest-growing ale. That’s thanks to Molson Coors’ efforts to differentiate it in the on-trade with initiatives such as the introduction of new chilled cask dispensers, and build the idea of Cornwall as a brand, London Pride-style.

It also invested in a new pilot plant at Rock that focuses on innovation, to tackle the perception of ale as an ‘old man’s drink’.

Those efforts scooped it the title of Best Drinks Brand at The Grocer Gold Awards earlier in June. Our expert judges sad the brand stood out against stiff competition “for its ability to thrive in a highly challenging market”.

Which just goes to show it’s not just the trendy new brands that can appeal to the emerging experimental crowd. With the right approach to NPD and innovation, it turns out you can teach an old dog new tricks.

Innovations in beer and cider 2019 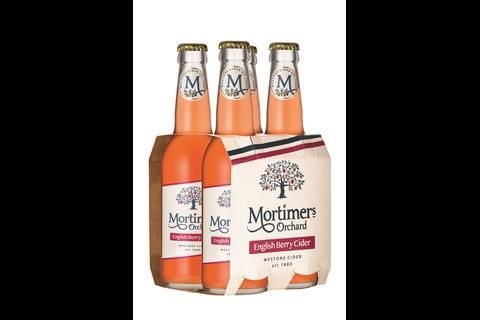 Mortimers Orchard Launched: June 2019 Manufacturer: Westons Like Thatchers’ Rosé, Westons’ ‘super-premium’ Mortimers Orchard brand has hit Sainsbury’s in two flavours: English Apple and English Berry. With an eye to convincing mainstream shoppers to trade up in the cider aisle, it comes in a small pack the brand claims is more appealing to non-cider shoppers (rsp: £4.50-£5/4x330ml). 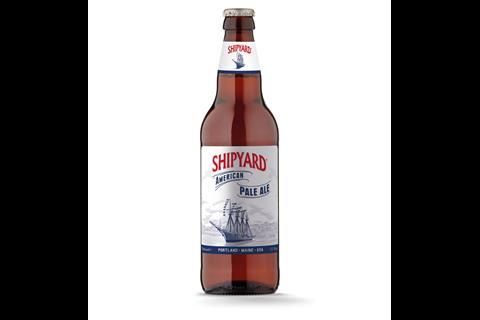 Shipyard APA Launched: June 2019 Manufacturer: Marston’s Shipyard’s IPA scored a blinder this year thanks to its position somewhere between craft beer and PBA, offering modern beer styles with a more traditional pack and brand. This latest addition to the range rings in at an accessible 4.5% abv, and has already performed wonders for owner Marston’s in the on-trade. A non-alcoholic version of Shipyard, called ‘Lowtide’, is also in the works, Marston’s’ first launch into the booming no & low category (rsp: TBC). 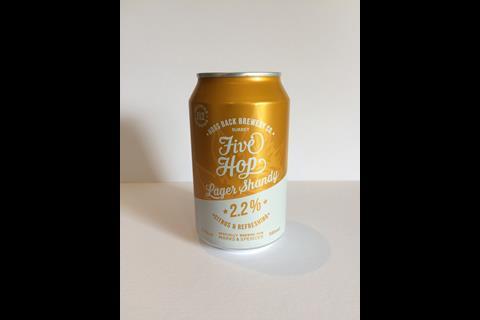 Five Hop Lager Shandy Launched: May 2019 Manufacturer: Hogs Back Brewery It’s not just low and non-alcoholic beers that are shaking up the weaker end of the market. Lower-alcohol brews that still pack a little bit of a boozy punch are trying to appeal to those that want to moderate – but perhaps not fully. This lager shandy (2.2% abv) from Hogs Back has joined M&S’s own-label craft beer range (rsp: £1.60). 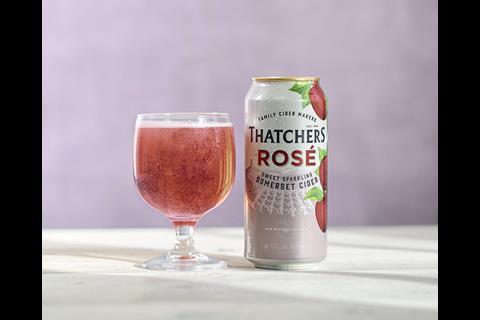 Thatchers Rosé Launched: November 2018 Manufacturer: Thatchers Anyone for posh Dark Fruits? This fruity NPD from Thatchers is testament to the effect the fruit cider boom is having on the wider category: even the premium suppliers like Thatchers, whose apple brands are largely growing strongly, can see the direction of travel. The message from the market? That the future’s pink (rsp: £5.50/4x440ml).