The new face of the fifties: Healthcare & Supplements Category Report 2018

The UK population is ageing – but forget picking up the pipe and slippers. Like Brad Pitt, the new 50-plus generation is determined to keep healthy, and they’re taking more and more supplements to do so

Turning 50 isn’t what it used to be. Not long ago, it was time to join the ranks of the blue rinse brigade. Today, the demographic is more likely to identify with Brad Pitt than Hilda Ogden. True, the over-50s aren’t actually reversing the ageing process as Brad Pitt’s character does in Benjamin Button (film poster above) but they are doing their best to stop it in its tracks. The new Saga qualifiers are active, healthy and - most importantly - are taking care of themselves.

The figures say it all. The total healthcare and supplements market has risen 4.4% in value to nearly £495m [Kantar Worldpanel 52 w/e 29 January 2018]. Nowhere has the growth been more staggering than in the over-50s multivitamins sub-category, which has shot up 42.4% in value to be worth over £15m. This generation is also thought to be a driving force behind the meteoric rise of other supplements such as vitamin D. It seems the vitamins, minerals and supplements market should be writing the baby boomers a thank you note.

It would be easy to attribute this growth purely to the UK’s ageing population. In 2016, 18% of the UK population was aged 65 or over, according to the Office of National Statistics. That compares with 14% in 1976 (and the figure is expected to reach nearly 25% by 2046). So there is naturally a larger target market for over-50s supplements. But sales are rising far faster than the rate of ageing - and that’s down to a changing mindset, as well as changing demographics.

Brand and packaging design agency PB Creative, which has worked on supplement brand Lifeplus Be, says this generation is far more proactive than its predecessors when it comes to health. “The pros of a more consistent approach to maintaining a healthy lifestyle in our middle and later years are now widely accepted,” says director Pete Hayes.

Lee Smith, CEO of The Supplement Factory, agrees “middle-aged peer groups are spending more time talking about their health and wellbeing than ever before”. It can’t hurt that the NHS is increasingly encouraging people to take responsibility for their own health, through initiatives such as its Livewell campaign. The increasingly health-conscious millennial generation is another contributing factor, Smith believes. “The 50-plus are seeing their children becoming fitter and want to participate in that same culture,” he says. It’s not just about staying young. “It’s about being healthier, which also means being happier.” 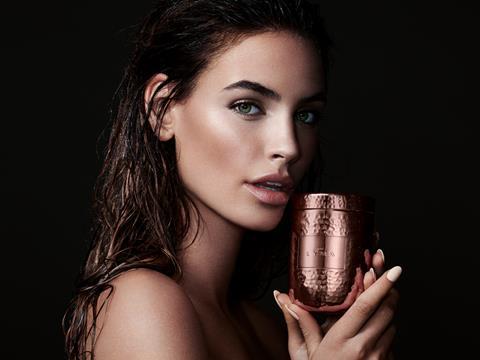 High-end health with the ‘super supplements’

For the likes of Hollywood stars such as Brad Pitt, that may mean hours pumping iron in the gym. But mere mortals understand they may need a bit of help achieving the goal of optimal health, says Robin Deb, founder of supplement company Synergy. “We understand the important role that diet and exercise play and where we might need a supplemental ‘boost’ such as vitamins to help bone health and muscle strength.”

Multivitamins can cover all bases. Other consumers prefer a more targeted approach. One of the areas where over-50s might need a particular boost is in the ‘sunshine vitamin’, which has been all over the papers since 2016 government guidelines suggested everyone considered vitamin D supplements in the winter months. Age-related abnormalities such as soft bones (osteomalacia) or fragile bones (osteoporosis) make the supplement particularly relevant to over-65s. So these consumers are thought to be a key factor in another bumper year for vitamin D, whose value has soared 24.3% to top the £10m mark.

Another area over-50s might need a helping hand in is sleep. Last year, Nytol carried out a survey that found nearly a quarter (24.4%) of respondents aged 55 to 64 felt tired every day due to a lack of sleep, and over half (54.7%) said they did not get enough sleep at night.

“This is clearly a concern for the older generations, as 26.2% of those in the 55 to 64 age bracket and 21.5% of those over 65 worry a lack of sleep will affect their health,” says Nytol’s commercial strategy and implementation director Dan Williams. So it’s unsurprising that the over-50s are a core market for the brand, whose sales have grown 15% over the past year. Interestingly, sales of its herbal variant have grown at a faster rate of 45%.

This fits with a growing appetite for all things herbal - and not just among the over-50s. According to Kantar data, sales of herbal supplements shot up 19.6% in value over the past year to top £28m, as consumers look for ‘natural’ remedies.

Ben Andrews, UK general manager at Nelsons, believes this idea increasingly chimes with today’s shopper. He says Nelsons’ recently launched Rescue Plus range - the original Rescue Remedy with additional vitamins - has “really started to drive new consumers into our brand”. “Natural is a really important cue for consumers,” Andrews says. “We are seeing consumers want supplements that work in harmony with their bodies.

“If you look at wider categories such as food, drink, personal care and beauty, natural is now a consistent choice and has become a large percentage of these markets,” he adds. “There is no reason why in supplements and healthcare this doesn’t become the case. Retailers are seeing the importance of natural as an option and giving more space and awareness. This in turn gives consumers confidence in the choices they make.”

This focus on natural means many consumers are turning to remedies that were once considered old-fashioned. Holland & Barrett is seeing a rise in echinacea to fight off colds, for example. Lisa Sinclair, the chain’s head of vitamins, minerals and supplements, also reports a resurgence of herbal products to treat low mood, anxiety and sleep such as St John’s wort and valerian. “As customers’ lives become busier and more hectic, more and more people are looking to something more natural and plant-based to help.”

Traditional they may be, but that doesn’t mean they have to come in a traditional format. Sinclair says Holland & Barrett is “always on the hunt for new products in liquids, chewables and effervescent supplements” to cater for people suffering from ‘pill fatigue’, who either don’t want to take pills, or add to their existing medicines regime. Many supplements are already going down this route - Nature’s Way Alive!, for example, has just added vitamin D to its range of chewable, flavoured vitamins - so it makes sense that herbal brands will follow.

The addition of on-trend ingredients can also make a well-worn supplement seem more appealing. Neal’s Yard natural health director Susan Curtis says it’s important to look at what’s popular in the market. As the turmeric latte takes centre stage, there has been more demand for products containing turmeric in the past couple of years. And the rise in veganism means many are looking for options that don’t use animal products (Synergy Biologics has just launched an addition to its ProD3 range that is suitable for vegans).

Chewy, vegan or turmeric-based, the supplements market is looking in healthy shape. And as the population ages, more and more people are likely to start looking for a health boost to keep them in top shape for longer. The tale of Benjamin Button may be closer to reality than we once thought.