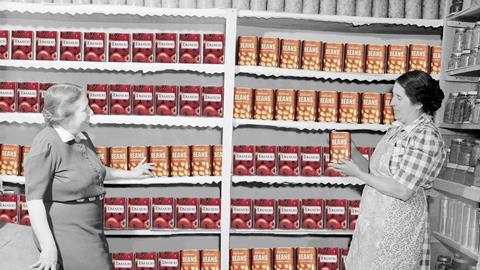 No-deal Brexit planning prepared many suppliers for a rocky road ahead. But the coronavirus outbreak saw shelves wiped clean

Remember Brexit? Having been eclipsed for many weeks by Covid-19, it was back in the news last week, when Downing Street said it would refuse to extend the UK’s transition period, even if Brussels requested a delay.

It’s a troubling prospect for food and drink suppliers already under immense strain from the coronavirus pandemic - which is leading some in the ambient sector to burn through stocks they’d built up in preparation for a dreaded no-deal exit from the EU.

“We were already maintaining as much raw material supply as we could and had increased our warehousing facility to prepare for delays at the ports following Brexit,” says Michele Conway, sales director at Norfolk-based dried pasta maker Pasta Foods. “We are now running production 24/7.”

It’s not alone. Princes Food Group marketing director Alan Eriksen says the company has “conducted scenario planning as a business both around the outcomes of Brexit and at the outset of the Covid-19 pandemic. This has allowed us to effectively manage the challenges of the past four weeks.”

Those challenges were indeed huge. Canned food sales surged 72.6% year on year in March, a rise worth £137.1m [Kantar 4 w/e 22 March 2020]. By 15 March, when the UK’s confirmed coronavirus cases passed 1,000, availability of canned food stood at just 19%, according to data provider Shepper. Pasta and UHT milk were even scarcer at just 6% - and that was on the day before everyone was advised to work from home and avoid pubs and restaurants. 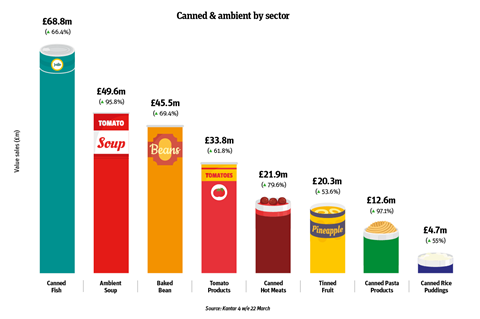 Even now, as a semblance of order returns to supermarkets, some shelves stripped bare by panic buying have still not been fully restocked. In fact, The Grocer’s mystery shoppers reported a scarcity of some ambient goods as recently as last week.

So, how effective have ambient suppliers’ responses been to the coronavirus outbreak? Which items were on shopping lists as people scrambled to fill their pandemic pantries? Which were hardest to find? And with lockdown continuing, what’s the outlook for supply and demand?

“We’ve never seen anything like this,” says Nick Bartlett, sales & marketing director at Crediton Dairy, which supplies about 35% of the UHT milk sold in UK supermarkets.

“Lockdown was precipitated by panic buying, and we started to ramp up production. We sold 100% more UHT milk than normal in four-and-a-half weeks. We upped production by 40%. We’re still at that level now.”

Two factors have stood in Crediton’s favour. “Our business is very much retail-aligned, so we have not had the same experience of suppliers to foodservice,” Bartlett says, in reference to news of dairy farmers being forced to dump milk following the forced closure of cafés and restaurants on 20 March.

“We’ve been able to buy in milk that had been destined for foodservice, and that’s ended up in our UHT. We were on the verge of running down packaging stocks of one-litre UHT cartons and one month away from decommissioning the machine we used for that format. Thankfully, we were able to turn that on, and we now have three machines running to allow the increase in output.”

Not everyone has had this luxury, or luck. Take Del Monte, for instance. “We’re working with naturally grown products, so we can’t just turn supplies on or off,” says the brand’s senior commercial director Martin Tilney. “It takes 18 months to grow a pineapple. We’re vertically integrated and will not compromise on quality by buying from elsewhere. This has put a huge strain on the supply chain.” There are other challenges, too. All Del Monte canned pineapples sold in the UK come from Kenya, which means they can take up to six weeks to be shipped over.

As a contingency plan, Tilney says the fruit could be sourced from the brand’s Philippine operations if supplies continue to be stretched. (Its other canned products, such as pears, peaches and fruit cocktail, are grown and processed in Greece, where the season doesn’t peak until June.)

Tinned tomatoes are facing similar pressures on supply. Poor crops in Italy, the world’s biggest producer of tomatoes for tins, have hit availability hard at a time of rising demand. “We’re trying to ration things so that as many customers as possible get some stock even if it’s not what they’ve ordered,” a director at one leading supplier told The Grocer earlier this month. “Larger customers get more and smaller customers less. It’s the most logical way we can do it.” 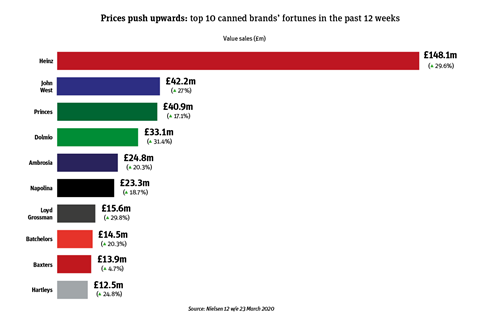 Even if the supply issue is resolved, there are other issues at play, warns Simon Fry, marketing director at RH Amar, UK distributor of Italy’s bestselling canned tomato brand Mutti. Logistics are causing frustrations, too.

One thing all ambient suppliers are keen to stress is how hard they are working to maintain availability - especially because need for efficiency could become more urgent in coming weeks. As coronavirus infection rates peak, staff shortages may increase.

“A significant reduction in staff would be a concern,” says Crediton’s Bartlett. “So we have to concentrate on being as efficient as possible and reducing practices that are particularly labour-intensive. For example, we may have to implement a greater minimum order for smaller retailers to drive efficiency.”

At Princes, work is similarly centred on mitigating the heavy impact of the short-term spike in demand. The supplier has been “in close contact with customers to ensure we’re transparent on availability, disruption is minimised, and transport is used as efficiently as possible”, says Eriksen.

“Production output across our canning sites in the UK and Italy significantly increased over the past few weeks to meet the increased demand despite challenges, and this is in part due to the fantastic ongoing efforts of our dedicated supply chain team in managing stock levels,” he adds.

“Waitrose asked us to provide Mutti’s stock to them, although we don’t have an ongoing listing with them,” says RH Amar’s Fry. “Mutti is very keen to grow their business in the UK, so they have made sure that stocks are available here. When we had this big peak in demand, they moved stocks they’d allocated elsewhere to fill that demand.”

It’s easy to see why Mutti chose to prioritise the UK. According to Kantar data, canned tomato sales rose 61.8%, or £12.9m, in the four weeks ending 22 March (see left). And even without the impact of coronavirus, canned tomatoes are a strong seller on these shores. In the past year, volume sales of tomatoes have grown 1.1% in an overall canned and ambient market that fell by 0.6% [Kantar 52 w/e 29 December 2019].

“Tinned tomatoes are performing particularly well as they are a versatile base for a host of dishes including traditional favourites, such as spaghetti bolognese to spicy curries and homemade sauces,” she says.

That point is particularly relevant during lockdown. “With more time being spent at home, consumers are relying on store cupboard ingredients that offer meals they can cook in batch and will last,” Kane adds. So similarly to Mutti, Tarantella has opted to hold more stock in the UK at this time.

“With more time being spent at home, consumers are relying on batch cooking”

The latter has proven a particular point of controversy. Heinz and Princes (maker of Hunger Breaks and Branston baked beans) both insist their supply chains are robust enough to handle the spike in demand.

But Heinz is exploring new ways of getting its products to customers. Last week, it launched DTC service Heinz at Home, which attracted immediate criticism from independent retailers and wholesalers as they faced ongoing stock shortages.

Heinz insists the service - which allows shoppers to order 16-can bundles of beans, soup and spaghetti hoops for £10 (plus £3.50 postage) - will not affect availability for retailers. “We’ve had to take the decision to concentrate our manufacturing on our most popular varieties, which continue to be available to independent wholesale customers,” says sales director Ross Warnes.

“These can be run at maximum speed and efficiency by minimising line changes for short runs. Unfortunately, this means that lower-volume sellers will no longer be available for a few weeks as we replenish retailers and wholesalers with our most popular varieties and provide stock for care packages for the elderly and vulnerable.”

So essentially, your basic beans should be on the shelves - but don’t expect anything fancy. At least, not from the branded area of the market. Own label may be a different story. Looking at the full year, own label baked beans grew 2.5% in value to account for 27.8% of British baked bean sales in 2019 [Kantar]. That was driven by a strong performance from premium lines, notes Kantar analyst Bianca Draghici.

“The trend of shoppers looking for the same product quality at lower prices is still going strong, with brands struggling and growth among premium own label being driven by Aldi, Lidl and Sainsbury’s,” says Draghici.

Such frugality is likely to continue amid a post-Covid economic crash. And that’s before Brexit lands with a thump. 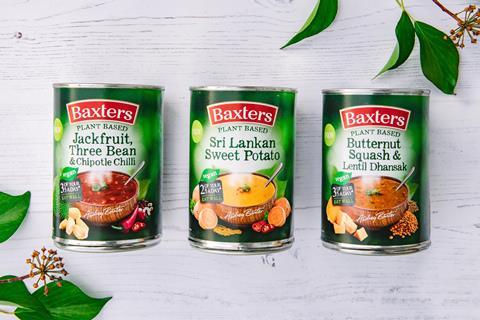 Baxters Plant Based Soup | Launch date: April 2020 | Manufacturer: Baxters Food Group | Veggie soup is nothing new. But Baxters claims its latest range is a UK first: plant-based tinned soup. The suitability for vegans isn’t the only thing that makes this three-strong lineup stand out. Also note the use of trendy ingredients across the variants: Jackfruit, Three Bean & Chipotle Chilli; Sri Lankan Sweet Potato; and Butternut Squash & Lentil Dhansak. The trio (rsp: £1.55/380g) rolled into Tesco this month, with further listings expected later in the year. 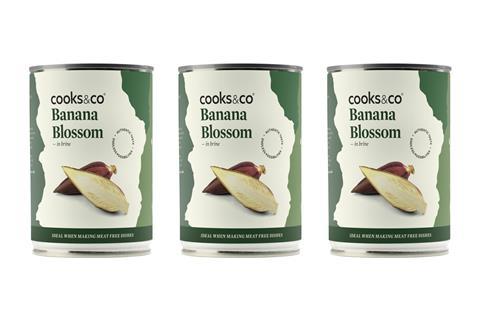 Cooks & Co Banana Blossom | Launch date: May 2020 | Manufacturer: RH Amar | Banana blossom is often used in southeast Asian and Indian cooking. Also known as banana heart, it’s a fleshy, purple-skinned flower that grows at the end of banana fruit clusters. It has a flaky texture, and can be eaten raw or used as a substitute for fish. RH Amar is pitching it as a meat alternative for barbecue season (rsp: £2.25/400g). 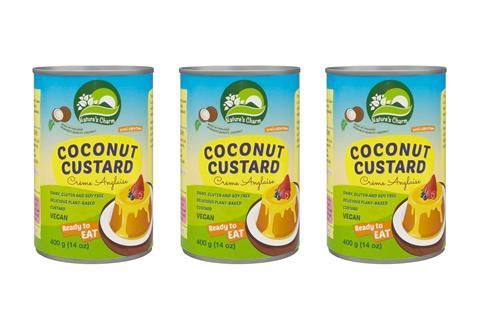 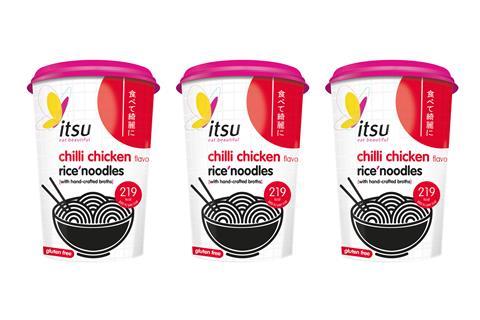 Itsu Chilli Chicken Rice Noodles | Launch date: March 2020 | Manufacturer: Itsu | Instant noodle offers have been moving into more premium, health-orientated areas for some time now, and Itsu has been at the vanguard. The brand’s latest launch contains gluten-free rice noodles, with a chilli & chicken-flavoured, miso-based broth and a sachet of dried spring onion for a crunchy topping. It has an rsp of £1.75 for 65g.