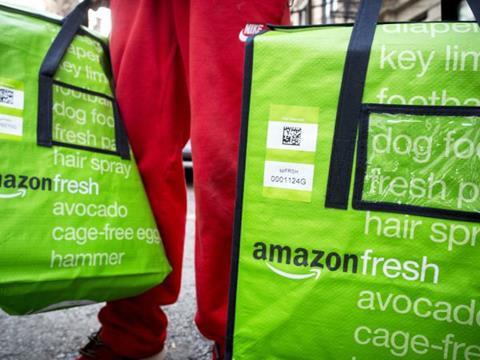 Just 18% of shoppers would not buy books from Amazon

More than a third of shoppers would not buy groceries from Amazon, according to new research released today.

A survey of 2,000 consumers by research agency Future Thinking found that 35% said they would not use the online giant to buy food and drink compared to just 18% who wouldn’t buy books on Amazon.

Of 23 product categories, grocery was fourth from top for consumer reluctance, behind glasses and contact lenses (43%), cars or motorbikes (47%) and insurance (50%). Pet food and accessories came fifth, with 33% saying they wouldn’t consider buying.

The products consumers were most willing to buy were small electrical appliances, with just 17% saying they wouldn’t consider Amazon. Books and home entertainment were joint second from bottom, along with music and homewares, all at 18%.

Consumer confidence also seemed to be lacking in clothing from the online giant, with 25% saying they wouldn’t buy clothing for adults or shoes and 26% saying no to children’s clothes.

The proportion that said they would not consider buying anything at all from Amazon was 10%.

“While Amazon dominates in segments such as music and home entertainment, it’s clear that consumers have trust issues when it comes to products that go either in or on our bodies, for example clothes or contact lenses,” said Future Thinking senior research director Noreen Kinsey.

“Despite being the world’s biggest online retailer, the Amazon Sellers marketplace still suffers from issues around counterfeit goods and quality control, and fashion presents a particular risk. The key lesson other businesses can take from this is that building trust with customers is all-important, and this is true for e-retailers and bricks-and-mortar businesses alike.”