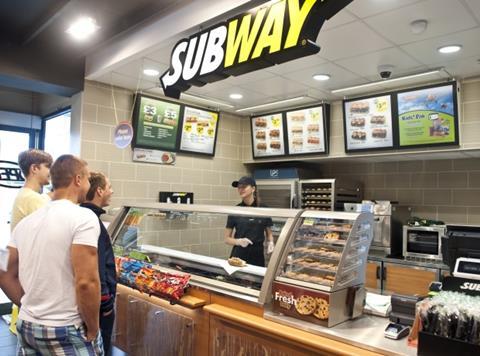 Subway has opened its 10th East of England Co-op branch in a further expansion of its business outside the high street.

The branch in the Co-op on Earlham Green Lane, Norwich, will sell a “wide range” of subs, flatbreads, salads and drinks and create 11 jobs.

The opening marks the 750th Subway store situated off the high street in what the company calls “non traditional” locations. These stores represent 30% of Subway’s 2,500-strong estate.

Peter Dowding, country director of Subway UK and Ireland, said the new store was evidence of the “strong corporate partnerships” it has forged with companies such as East of England Co-op. “Non-traditional development has been a great area of growth for the Subway brand over recent years, and we expect further growth into 2017 and beyond,” he said.

Brendan Smith, head of retail operations for the East of England Co-op, added: “We’re excited that our store marks a milestone for the Subway brand, and has enabled us to create more jobs for local people. Partnering with the Subway brand has enhanced our offering to customers, and we look forward to exploring further opportunities in the new year.”