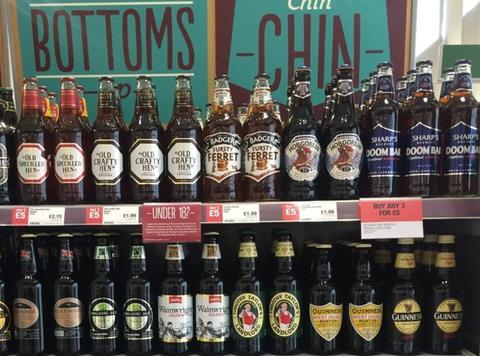 The Co-operative Food has expanded its ale line-up and created region-specific beer ranges.

The retailer is introducing 40 new regional ales from across Britain this month, taking the total number of ales offered by the retailer to 111.

Stores will carry beers from a core range of national ales - including market-leading brands such as Old Speckled Hen, Hobgoblin and Sharp’s Doom Bar – along with beers offered only in the region where they are brewed.

Among the additions are beers from 11 breweries new to The Co-op. Individual bottles will retail between £1.99 and £2.49, while the full range is included in a 3-for-£5 offer (except in Scotland).

The launches come in response to Co-op research which indicated 71% of people think it’s important to buy locally-sourced varieties. The Co-op Food ale buyer Joe Turner said the strategy was intended to place the retailer at heart of the communities it operates in.

“Across the UK, our shoppers’ needs are different and it’s important to acknowledge that,” he added. “With more people than ever enjoying real ale, and local offerings a crucial part of its success, it’s exciting to collaborate with such a great variety of breweries across the UK.”