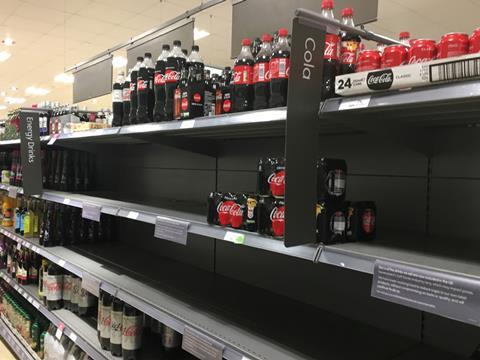 Twitter users across the UK have expressed concerns over ongoing shortages of their favourite brands of soft drinks. And the CEO of a leading wholesaler said coping with strong demand for drinks during the heatwave was proving “really tough”, and called the efforts of one drinks supplier “a shambles”.

The CO2 crisis first emerged in June after several major European CO2 producing facilities shut down for maintenance. The lack of CO2 impacted large parts of the food and drink industry, including meat production and bakeries, but soft drinks producers appear to have taken the biggest hit.

PoS information advising shoppers that lines remained temporarily out of stock were still on display in store this week, including some citing the CO2 issue, amid predictions of further shortages for up to six weeks.

However, one major wholesaler also suggested that some lines had been impacted by strikes by lorry drivers in France in recent weeks.