British shoppers will pay significantly more for their turkeys this Christmas 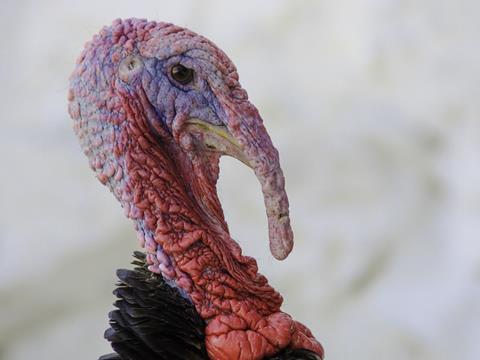 British turkeys might have escaped bird flu, but Brexit means shoppers will be paying more for their birds this Christmas.

After dodging inflation last year as price wars kept costs for consumers down, turkey could be significantly more expensive this Christmas, with EU wholesale prices currently up 16% year on year - from £1.71/kg last December to £1.82/kg this month [Mintec].

“Inflation has hit in the wake of Brexit, devaluing the pound and causing issues securing overseas labour for seasonal plucking and production,” says the BPC’s Shraddha Kaul.

British flocks escaped an outbreak of H5N8 avian influenza that resulted in the cull of tens of millions of birds in Asia and Eastern Europe over the summer, adds British Turkey Federation chairman Paul Kelly.

However, increased costs have resulted in a 12% year on year drop in UK turkey slaughterings, which is limiting supplies and driving up wholesale prices, according to Mintec analyst Jonathan Stokes.

Kelly, also MD of supplier Kelly Turkeys, says he has increased his company’s retail prices by 4% compared with last year due to rising production costs. Wages have increased by 9-13% as a result of the weakened pound, he says, with some producers experiencing shortages in migrant labour.

However, bird health has been good, while the mild autumn and good quality wheat crop means birds are on average about 500g-1kg heavier than last year, he says, and “some suppliers have actually lowered their price per kilo as a result”.

More shoppers might plump for a full bird this year rather than turkey crowns, which have plateaued after several years of sales growth, Kelly adds. “They are cottoning on to the fact that increased production costs and wastage means they’re being charged similar amounts to the full bird.”