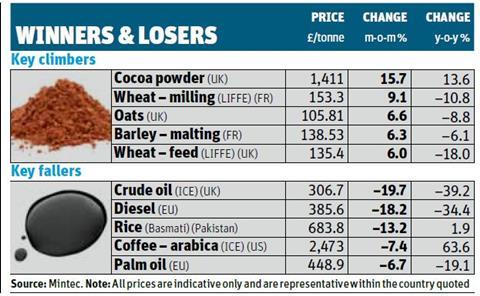 Cocoa powder prices have risen 15.7% month on month as a result of falling cocoa butter prices. Processors have increased their prices for powder in an attempt to offset the impact on their profits of lower butter prices - but this is not believed to be large enough for a return to profitability.

Crude oil prices dropped below $50 a barrel for the first time since May 2009, driven by increasing production from OPEC and non-OPEC countries combined with a weakening outlook for global economic growth.

Arabica coffee prices fell after 2014/15 production forecasts for Brazil were revised upwards to 51.2 million tonnes. That figure would still reflect a fall of 6% on last year’s production, resulting in a 63.6% year-on-year rise.