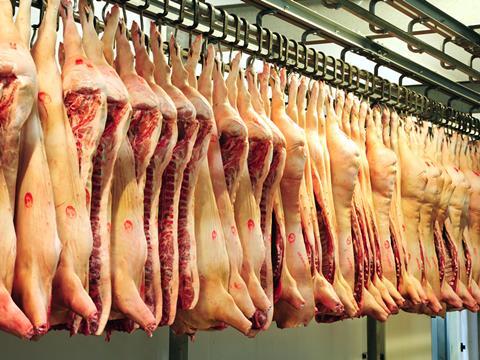 European pork processors sold a record 1.8 million tonnes of pork to China in 2016

Rising prices for Euro-pean pork could hit exports to China this year, according to Rabobank.

However, Rabobank’s latest report warns 2017 and beyond will be “tougher for European traders” as Chinese pork prices fall, European prices rise and competition from other pork-producing countries increases.

Tight supplies pushed average EU pig prices to their highest level since 2013 last month, according to AHDB. In the UK, the EU-spec standard pig price tipped over the 160p/kg mark for the first time since July 2014 at the end of May [AHDB].

Rabobank predicts European pork exports to China will drop to 1.6 million in 2017, with Europe’s share of Chinese pork imports dipping from 60% in 2016 to 53% this year.

UK pork exports to China have already slowed, down 6% year on year in March 2017 to 3,900 tonnes, according to HMRC data.

China is the largest export destination for British pork, and any big losses in the market could potentially push up pork prices for UK consumers, warns Rabobank global strategist in animal protein Justin Sherrard.

Exports to the Asian country, which is a major destination for offal exports and cuts that are less favoured domestically, helps the UK pork industry maximise the full value of the carcase, he adds. “This improves total returns to pig farmers and processors, and lowers prices to UK consumers.”

In order to maintain their foothold in the Chinese market in the future, exporters should look to build long-term market and distribution relationships with Chinese businesses, or invest directly in processing facilities in China, the Rabobank report suggests.