Don’t mess with Crickhowell. The Welsh town may be nestled in the sleepy Brecon Beacons, but it could rival any town in the UK for community spirit and an outright loathing of big business.

In April, this proudly independent town (the only chain in the area is a single branch of Boots) gathered together to protest against a former pub being turned into a supermarket-owned c-store.

Sure, there is nothing especially unusual about that. But then, in November, 180 spiky residents pooled their money together and raised enough (£500,000) to strike a deal with Punch Taverns to buy the pub themselves.

That’s commitment. So, in the summer, when the BBC started scoping out towns to take part in a documentary (working title: The Town That Went Offshore) that would expose the corporation tax-dodging antics of big business and attempt to level the playing field for small businesses, it was attracted to Crickhowell’s feisty reputation.

And when Crickhowell’s independent traders, including a salmon smokery, a local coffee shop and a bakery, learnt more about what companies like Facebook, Google, Caffè Nero and Amazon were up to, they were equally attracted by the idea of trying to force the taxman to make the system fairer for small businesses.

Now they have a plan. A total of 14 shops in the Welsh town have joined the FairTaxTown steering group as they prepare to launch a campaign to get another 500 UK high streets to join them.

Their aim is to force the government into introducing legislation to crack down on tax avoidance loopholes used by big businesses. And the BBC2 documentary, which is still being filmed and will air early next year, will show the group travelling to popular offshore locations the Isle of Man and Amsterdam to learn more how these schemes work.

Steve Lewis is one of the founder members of the FairTaxTown campaign group. He also runs the Number 18 coffee shop in Crickhowell. Since starting the business in 2006 he has focused on local, seasonal fresh produce by sourcing 85% from nearby shops and suppliers. Next year he will pay a £31,000 corporation tax bill. That’s seven times the amount of corporation tax Facebook paid in 2014.

“I’ve always known it wasn’t a level playing field but not to what extent or depth,” he says. “I’ve never considered not paying my tax, this isn’t about that. We want every business in the UK to pay a fair amount of corporation tax. The same amount for everyone - whether that’s 20% or 12%. Our mission is to change the tax system.”

He’s joined on his mission by Jo Carthew, who runs the Black Mountains Smokery with her husband Jonathan. They started the business in 1996 after returning from living and working in Botswana, as they wanted to bring up their children in the Welsh countryside. They specialise in oak-smoked fish, meats, poultry and cheese.

“As a ‘tax naïve’ I didn’t realise at the outset how interested I would become or how strongly I would feel about what we discovered,” she says. “We originally created FairTaxTown to highlight unfairness in our tax system but it has taken on a life of its own with ever-increasing support and interest from afar. Our vision is that every business in the UK will pay fair corporation tax on profits generated here and our mission is to change the tax system to that end.”

Like many people, Carthew says until their “journey of discovery” she had assumed that it was a “handful of multinationals” who were avoiding paying tax on profits generated in the UK.

But she says what they discovered was that “the great majority of our top 100 UK companies use legal profit-shifting mechanisms to become more tax efficient. Independent businesses simply seek a level playing field - they cannot secure a future in our high streets when they are competing against large tax-efficient brands with relatively huge marketing power and budget.” 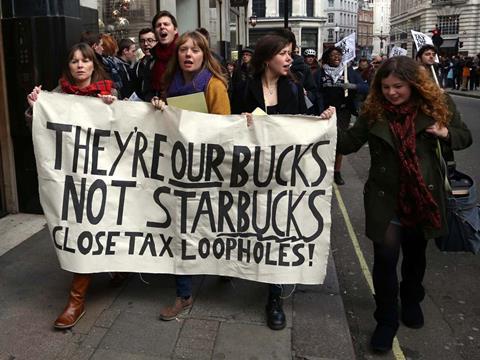 The documentary will show a meeting with a senior official at the HM Revenue & Customs (HMRC), Jim Harra, where, to their incredulity, they discover that once a company reaches a certain size it’s assigned an HMRC customer service representative, a privilege a small businesses can only dream of.

Ostensibly it allows the HMRC to check that the right amount of tax is being paid. However, it also gives the company the chance to discuss any proposed tax avoidance schemes it may be considering - narrowing the chance of making a mistake and finding out almost immediately if it’s legal according to the HMRC.

“You’ve got this crazy system where it’s legal to avoid tax,” says Lewis. “When we met with Jim he said if our tax bill was akin to a billion and we could come up with a scheme that was parallel to or as legal as what the big boys were doing then he would have to sit down and talk to us.”

An HMRC spokesman denies the scheme works in favour of big business.

“HMRC enforces the tax rules fairly across the board irrespective of the size or structure of the business and we are always happy to give advice and support to taxpayers who want to play by the rules,” he says.

“The government is clear that multinationals must pay their fair share of tax so it has introduced new legislation to prevent multinationals from diverting their UK profits from the UK tax system and has invested additional funding in HMRC to tackle abuse by multinationals.”

Undeterred, the FairTaxTown steering group is seeking 500 additional high streets in the UK to join them, so they have a chance to put their plans to the HMRC.

They believe they’ve found a model that is similar in structure to those used by big businesses but are keeping the exact details of how the scheme would work a secret.

However, Lewis believes that each high street needs to generate £15m in turnover and once they have found 500 more like them they will have a collective corporation tax bill of £1bn and be able to force the HMRC’s hand.

“All I want is a conversation to ask if the current system is fair,” says Lewis. “If you make money on a high street, you pay the tax to the high street that you make the money on. It’s simple. If a customer comes into my coffee shop then I will pay the tax that will help them park their car, take their child to school or pay for a medical bill. And that’s what the big guys are simply not doing.”

One tax expert sympathises with Crickhowell, but thinks the plan will fail if HMRC chooses to play hardball.

Richard Murphy, director of Tax Research UK and professor of practice in international political economy at City University, is the founder of the Fair Tax Mark - a non-profit society - which encourages businesses to promote tax transparency and fairness.

He agrees that in some ways smaller businesses have a tougher tax regime and little access to help from the HMRC. He also believes that the government is saying one thing and doing another when it comes to corporation tax.

“George Osborne is trying to turn the UK into a tax haven itself,” he says. “We only charge large multinational companies tax on their UK profits, not worldwide. He’s reducing the corporation tax to 18% - that’s tax haven behaviour. He’s doing that to try and keep large multinational companies’ head offices in the UK. He’s not tried to close the loopholes, he doesn’t want to. He’s saying he’s opposed to the abuse but he doesn’t tackle it.”

But Murphy also says HMRC is “not in the business - by and large - of negotiating reductions in tax bills. If they got 500 high streets paying £1bn in corporation tax together the Revenue will turn around and say ‘you’re all small companies, you’re not all running the same kind of business, you’ve all got different tax reference numbers, you’ve all got different owners, so why should we sit down with you?’”

Whether they do or not is being kept top secret until after the BBC2 documentary, produced by Renegade Pictures, which is part of a Britain’s Black Economy series. But any independents interested in finding out more about the campaign can visit fairtaxtown.com.

“We are not offering you a tax scheme that can help save you any money on your tax bills,” reads the website. “We are looking for your support in calling for a change to a tax system which seems to be one rule for the big guy, and another for small businesses like us. If the government doesn’t act to close the tax loopholes, then we’re prepared to use them too, thanks very much. We’ll put our scheme in action and try it out. It might not work. We might get stopped. But it won’t stop us believing that either we all pay tax, or none of us do.”

Something about the town of Crickhowell suggests HMRC would be wise to take them at their word. 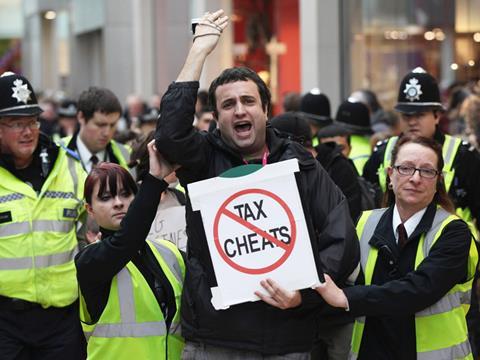 How does an offshore tax loophole work?

In the UK, companies - large and small - pay corporation tax on their UK profits at the rate of 20%. The Chancellor of the Exchequer, George Osborne, said in his Budget earlier this year that rate will be reduced to 18% by 2020. Large multinational companies are able to move some part of their business abroad - or offshore - with the aim of shifting profits out of the UK tax system. Generally, the destination will be a so-called tax haven where there is little or no corporation tax to pay. One of the ways they do this is by moving the value of their intellectual property offshore. This could be the name of the company, for example. They will then charge the UK part of the business for using it, and therefore profits are shifted to places like the Isle of Man or Luxembourg, and they can then legally dodge paying corporation tax in the UK. The process is complicated and the methods differ depending on the country and company structure.

Multinational companies, like Google, Amazon, Facebook and Starbucks, use offshore tax loopholes as a way to reduce their UK tax bills. While the practice is legal, it has understandably received widespread criticism as companies pay a fraction of what they would pay in tax, if any at all.

Last year, Amazon paid just £11.9m in corporation tax in the UK, despite £5.3bn in takings from UK sales. According to its UK accounts, Amazon.co.uk claims to not sell to British shoppers - instead its Luxembourg arm does. The controversial structure allows the company to divert its sales out of the UK and avoid tax on any consequent profits.

UK coffee chain Caffè Nero has not paid corporation tax in the UK since 2008, despite reporting £21.1m in profit last year. Its complicated tax structure operates via Luxembourg and the Isle of Man, allowing it to swerve the tax completely. The Grocer contacted Amazon and Caffè Nero, both of which declined to comment on the rebels’ plans.

What do you think of big businesses wriggling out of paying tax?

● Absolute disgrace it shouldn’t be allowed 73%

Do you think the UK tax system is open to abuse?

If money to pay clever accountants to reduce your taxes was no issue, would you do the same?

Are small businesses at a disadvantage when it comes to the UK tax system?

Do you agree with Tesco CEO Dave Lewis that business rates and living wage have created a lethal cocktail for businesses?