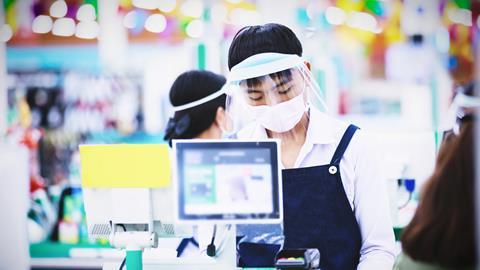 How GroceryAid is helping workers get through the coronavirus crisis

Demand for support from GroceryAid has rocketed since the pandemic started – just as fundraising was hit. But it’s adapted, and risen to the challenge

A couple of years ago, GroceryAid ran a risk assessment of disaster scenarios that could affect the charity’s ability to function. “One suggestion was what if we lost all our events for a year? But it was such a derisible possibility we didn’t even consider it,” says CEO Steve Barnes.

Now that possibility has become a reality. The pandemic forced GroceryAid to cancel all of its major fundraising events in 2020, and those scheduled for 2021 are also in jeopardy.

Unlike some charities, however, “GroceryAid can’t sit on our laurels and draw down reserves for three or four years without worrying about it”, says Barnes. “Our reserves simply wouldn’t cope with that.”

Combine it with increased demand for GroceryAid’s help, and the result could have been “potentially catastrophic”.

But the industry has stepped in to help. Companies were asked to support the charity based on the events they would have attended. Many others have booked to attend events well in advance.

“I was amazed, touched and hugely grateful that we had such terrific support,” says Barnes. “It’s testament to the industry and their respect for those colleagues we help. Not every company was in a position to support us. But enough were to get us to a good place and some were exceedingly generous and went above and beyond.”

The sector’s backing is essential, because GroceryAid has needed to up its level of support during the crisis. Compared with the previous year, GroceryAid has seen a 55% increase in applications for financial support, with crisis grants paid out up by 87%. There were 74% more calls to the charity’s helpline than in 2019.

Some have needed financial aid after contracting the virus – whether that’s to cover pulling out of work or even hospital parking charges. “It’s often the most trying time of their lives,” Barnes says.

“These aren’t jobs where, when you sign up, you accept an element of risk. It’s not the army”

There’s also been heightened demand for mental health assistance. Some have sought the charity’s help because they’ve been afraid to go into work, be it due to customer abuse or the threat of coronavirus.

“They are putting themselves at risk. These aren’t jobs where, when you sign up, you accept an element of risk. It’s not the army,” Barnes says. To deal with the health risks, on top of increasingly irritable and sometimes abusive customers, “takes immense bravery”.

So GroceryAid upped its support last year with the launch of  a £1.5m Covid-19 fund. It extended that support to foodservice wholesalers for the first time, as they suffered from the closure of hospitality. At the same time, its Schools Essentials grant allowed 1,350 children to be properly equipped for their return to school in September, something the charity will repeat this year. There is still “bandwidth” in all these funds.

The rise in requests for help is also down to increased awareness of GroceryAid. Something Barnes is proud of.

“But whilst we’ve made great progress, we mustn’t kid ourselves. I don’t think I can walk into any major branch of a supermarket or wholesaler or independent or factory line and everyone knows who we are,” he says. “We have to keep working hard, it’s our duty.”

With that in mind, GroceryAid has been proactive in reaching out to companies it sees may be struggling. “We’ve reached out. If we see a difficult situation we go and ask how we can help. Irrespective of whether they support the charity or not,” Barnes explains.

The hard work is not over. January saw a huge spike in contact from colleagues “which suggests Covid is really starting to bite”, he says.

Barnes is always touched by the gratitude of those GroceryAid can help. “But they don’t need to be grateful. This charity was set up to help colleagues in need, however that manifested itself,” he says. “That’s what we’re here to do.”

GroceryAid is appealing for support from the fmcg industry to raise awareness of #GroceryAidDay on 2 March.

Information about the campaign and downloadable materials can be found here.