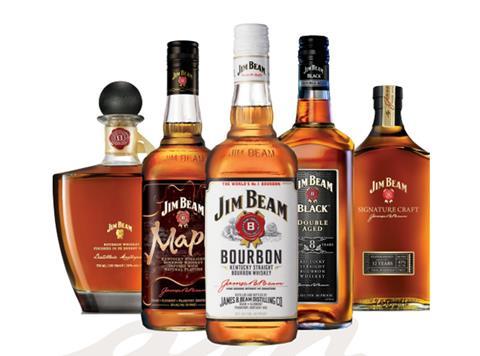 Jim Beam has been bought by Suntory for $16bn

Japanese firm Suntory has bought US spirits giant Jim Beam for around US$16bn.

The deal will see Suntory add Beam’s  ‘power’ brands to its portfolio, creating the world’s number-three global spirits player with net sales of around $4.3bn. It will strengthen Suntory’s existing Japanese whisky portfolio with the addition of bourbons Jim Beam and Makers’ Mark, whiskies Teachers and Canadian Club, as well as Pinnacle vodka, Sauza tequila and Courvoisier cognac.

Beam Inc CEO Matt Shattock, who will continue to lead Beam’s existing management team from Chicago, said it was an exciting development that would deliver substantial value for its stockholders and create an excellent platform for future growth.

“The combined company will have unparalleled expertise and portfolio breadth in premium whisky, which is driving the fastest growth in Western spirits”

“With particular strength in Bourbon, Scotch, Canadian, Irish and Japanese whisky, the combined company will have unparalleled expertise and portfolio breadth in premium whisky, which is driving the fastest growth in Western spirits,” he said.

“Our combined global routes to market will expand our joint distribution footprint, and the powerful innovation capabilities both companies have developed will be a significant advantage.”

Osaka-based Suntory, which owns Japanese malt whiskies Yamazaki and Hakushu as well as beer and ready-to-drink brands and non-alcoholic beverages, intends to drive growth by fully sharing production and quality control expertise, and leveraging its combined portfolio of brands and expanded distribution network.

The new deal is likely to close in Q2 2014, subject to approval.

The company was recently rumoured to be in the race to buy Diageo’s whisky business Whyte & Mackay, after Diageo offered to sell part of its whisky portfolio to allay competition concerns in its deal with United Spirits Limited.