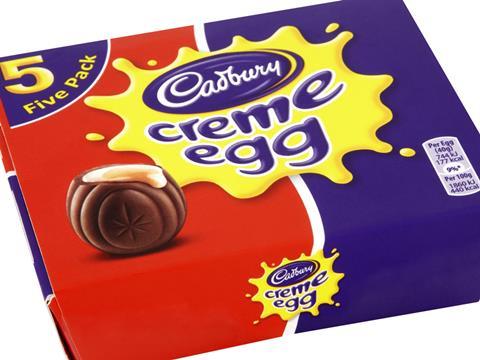 Chocolate fans say it’s no yolk that six-packs of Cadbury Creme Eggs have been reduced to five-packs.

Shoppers have taken to social media to complain about the move to smaller packs, which are being sold by some supermarkets for the same price as larger packs a year ago. Packaged in a similar box, they feature a ‘Five Pack’ flash.

Brand owner Mondelez revealed to The Grocer last October it had axed three and six-packs of Cadbury Creme eggs as it felt they catered for the same occasion, and would replace them for this Easter with a five-pack to sit alongside the singles and 12-packs. The move came with a slight reduction in rsp, from £3.05 to £2.85.

Since the packs started rolling out late in December, consumers have voiced their dismay on the brand’s Facebook page. Comments have included, “I’ve been sold a faulty box of eggs, instead of half a dozen there are only five in the box. As they still cost the same I’m assuming this is just a dodgy batch;” and, “Since when have eggs been sold in packs of five?”

Creme Egg brand manager Steve Chick said retailers were free to set their own prices, and added: “For the 2015 Easter season, we amended the range because consumer research identified ­similar usage for our three and six-pack in the 2014 season.”