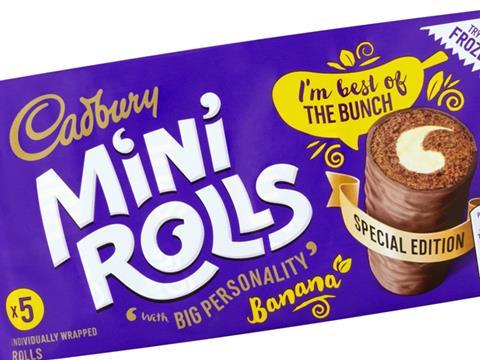 Premier Foods has given Cadbury Mini Rolls an overhaul with revamped packs, four new flavours and a £1m TV campaign - its first in eight years.

The revamped range, rolling out next week, features two new core flavours (raspberry and chocolate orange) alongside two limited editions - banana and cola. The NPD features “brighter new packaging with a bolder logo” that is being introduced over the next couple of weeks.

The new look had been designed to give the portfolio a “more modern feel”, said head of Cadbury cakes Joanna Agnew, while the new variants added “a touch of fun”.

The ad will debut on Monday 4 May and screen for four weeks.