Candy Kittens furthers US rollout with listings at Walmart 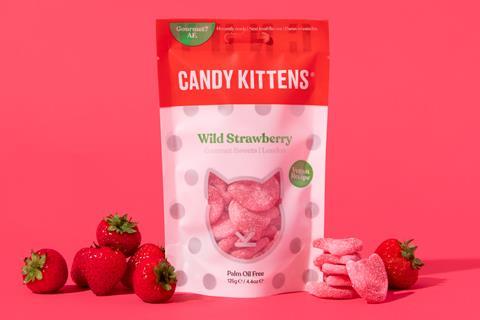 Candy Kittens is furthering its US expansion with a nationwide listing at Walmart.

The vegan confectionery brand – founded by TV personality Jamie Laing and partner Edward Williams – is rolling out its sharing and on-the-go packs in Sour Watermelon and Tropical Mango, as well as the sharing size Wild Strawberry flavour.

The range will launch into 3,899 stores this month, focusing on those in the east, central and western parts of the US, to capitalise on increased shopper demand for plant-based snacking, said Candy Kittens.

Co-founder and MD Williams said the listings provided “an opportunity to give American households their first taste of vegan gourmet sweets and shake up the dated legacy brands that currently fill the shelves”.

The expansion builds on its existing US listings with high-end retailers including Barnes & Noble and Bloomingdale’s.

Candy Kittens was confident that it could premiumise the US confectionery market, “as we have done in the UK”, said Williams.

He said Candy Kittens was “excited to breathe fresh air into the category and establish a new premium segement”, adding that its ‘gourmet sweets’ would be the first premium plant-based option to hit the retailer.

Earlier this year, the brand made headlines when it mulled legal action against Aldi for creating a range of sweets it said too closely resembled its own.

However it is unclear whether any legal proceedings ever took place. Candy Kittens did not offer comment when asked for an update.