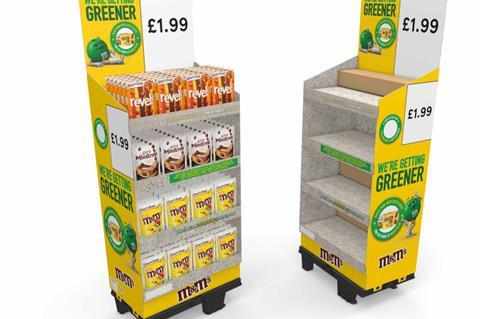 It has rolled the new displays into 350 Tesco stores

The confectionery giant has rolled out ‘bean boards’ made from 70% recycled paper and 30% waste cocoa beean shells into 350 of the retailer’s stores last week.

The design used no virgin tree fibres, and required 93% less land usage than the equivalent corrugated board display, said Mars.

It was “a prime example of how fmcg manufacturers can look beyond their production line to help create the world we want tomorrow and we’re looking forward to seeing how the trial goes so the wider industry can also benefit from using the new material”.

Yesterday, it was revealed Mars was to be one of a swathe of major suppliers – including Coca-Cola, Yorkshire Tea and Napolina – to join a refill trial at Asda’s flagship sustainability store in Leeds, designed to help shoppers reduce, reuse or recycle plastic packaging.

It comes as a recent YouGov survey, commissioned by Hearts & Science, suggested one in five Brits had ditched a particular brand over environmental concerns, with more than a third saying they had done so with a food and drink brand, and 33% for household essentials.