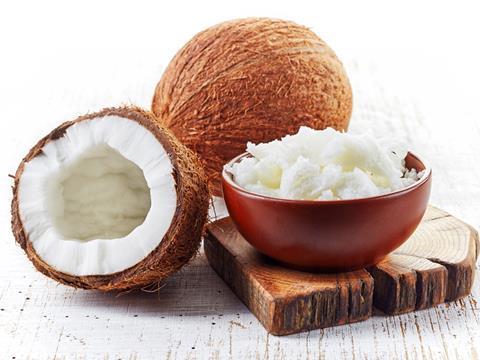 Brits have forked out an extra £12m on coconut oil in the past year as the trend for using the ‘super’ oil as everything from a cooking oil to a facial moisturiser continued to gather pace.

Sales surged 207.8% on volumes up 192.9%, making it Britain’s seventh bestselling oil, according to exclusive research for The Grocer [Kantar Worldpanel 52 w/e 31 January 2016].

“Premiumisation is occurring in the market as speciality oils take a greater share, up 4.3 pts to 12.6% in the latest year,” said Kantar analyst William Sohler.

“This is partly due to an increasing number of SKUs in speciality oil, a sector that has seen the arrival of over 35 different SKUs in the latest year - at least 15 of them being coconut oil.”

Aldi, Lidl and Sainsbury’s have all launched own-label coconut oil products in the past year, as brands such as The Groovy Food Co and Vita Coco have cashed in on the trend.

“We’ve been adding value to the category through innovation, achieved through the launch of the UK’s first organic cooking spray with virgin coconut oil, launched exclusively through Tesco last year,” said Rosie Hayward, founder of The Groovy Food Co, which has seen sales almost double to £5m in the past year [IRI 52 w/e 27 February 2016].

Further analysis by IRI suggests coconut oil sales through the mainstream grocers, not including the discounters, have risen 112% to £14m.

“Not only are [shoppers] being influenced by the popularity of Thai-inspired food, but also celebrities praising coconut products for everything from weight loss and hair conditioning to better brain function and whiter teeth,” said Tim Eales, director of strategic insight at IRI.