Cannabis, cacao and cider vinegar: what were the unexpected trends of 2018? 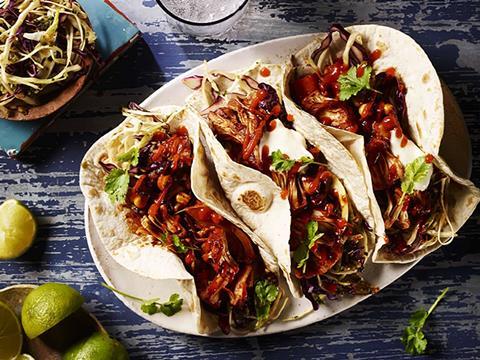 This year, vegan ingredient jackfruit went from an out-of-home sensation to the star of supermarket ready meals

At the beginning of the year, it would have been pretty hard to imagine a cannabis drink vying for supermarket space. An edible seaweed water bottle may have seemed similarly far-fetched. Yet in a year of a particularly bold innovation, both unlikely scenarios have come to pass.

Botanic Lab is promoting a tea made with cannabis extract as an alternative to “boring” and “flaccid” alcohol alternatives, and Selfridges is selling biodegradable ‘bubbles’ of water made from seaweed. This seemingly outlandish innovation hasn’t been random – rather a result of careful consideration of consumer insight and on-trend ingredients. So as 2019 draws to a close, we pick out the ingredients that have shaped NPD over the past 12 months.

It’s not just Botanic Lab getting in on the cannabis vibes. Coca-Cola is among the brands rumoured to be looking at CBD – the non-psychoactive strand of cannabis – as a soft drink ingredient. Purported to have anxiety-reducing and pain-relieving properties, CBD has all the makings of a wellness trend. Soft drink companies believe the ingredient could work especially well at a time when many are looking to curb their alcohol intake, instead demanding more exciting non-alcoholic beverages.

Although big in many corners of Asia, seaweed snacking has never taken off in the UK. Granted, Itsu has snack lines listed in Ocado and Sainsbury’s. But seaweed has never really overcome the general perceptions of ickiness among British consumers. Innovative companies are looking to change all that with new ways of presenting the ingredient. Take startup Seamore, which this spring launched a crowdfunding campaign to develop more products such as its seafood tagliatelle. Waitrose is selling red dulse seaweed as a seasoning for risotto or seafood spaghetti. Others are making seaweed functional, such as Selfridges with its edible drink packaging.

Chocolate has long been the enemy of the healthy eating crowd. But its key ingredient – cacao – is a very different matter. Raw cacao has emerged as a regular sighting in health-led NPD this year. Vivid Matcha’s range of Superlattes include cacao, turmeric and beetroot drinks. Pukka added a Cacao Maca Magic Latte to its repertoire in October. Healthy snacking is another area where cacao is thriving. Aduna uses raw cacao in its Superfood Energy Bars, while Pollen + Grace unveiled a Reishi + Raw Cacao Super Square in spring.

It’s hard to name a more publicised ingredient this year. Rising to fame through its resemblance to pulled pork, jackfruit has become a mainstay of vegan and vegetarian cuisine. What started as primarily an out-of-home trend has now made its way into the supermarkets. While Sainsbury’s started the ball rolling with Sweet & Smokey BBQ Pulled Jackfruit (pictured) at the beginning of the year, this has been followed up by a host of NPD such as Waitrose’s Vegetarian Jackfruit Biryani in October. Smaller brands are now pushing boundaries with innovative recipes such as Ima’s BBQ Pulled Jackfruit Sushi Burrito, which aims to tempt the food-to-go crowd.

Long endorsed by the likes of Victoria Beckham and Scarlett Johansson, apple cider vinegar has gained a strong following among wellness aficionados. For those who don’t want to try two tablespoons first thing on an empty stomach, a new wave of drinks have come on to the market containing the ingredient. And they couldn’t be much further away from the functional packs of apple cider vinegar you see in health food shops. A prime example is Nonsuch Shrubs, whose high-end, stylish fruity cider vinegar drinks include a newly launched Blood Orange & Bitter Lemon variant.

High quality products that make use of innovative ingredients like these are just the sort of thing The Grocer is looking to highlight with its new Own Label Accreditation Scheme. For further details on how to enter go to: https://www.thegrocerownlabel.co.uk/