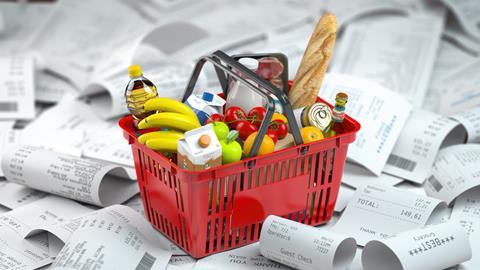 How is the cost of living crisis affecting grocery shopping habits?

Supermarket prices are surging. According to latest figures from Kantar Worldpanel, grocery inflation hit 7% this month – its highest level since May 2009. Unsurprisingly, nine out of 10 Brits are concerned about this rapid rise in the cost of ther weekly shop, a survey by Kantar found.

So what impact are higher prices having on shopping habits? We analysed exclusive data from a Shopmium survey of over 2,000 UK consumers to find out.

The cost of living crisis is having a big impact on household finances. According to Shopmium’s survey, two thirds (66%) of Brits have experienced a reduction in their disposable income since the start of the year – with 38% saying it’s reduced by more than 10%.

Recent food price inflation means over half (56%) of Brits surveyed by Shopmium said they now spend more on groceries than a year ago. The average spend is £65 per week, rising to £81 a week for families with children at home.

As a result of rising costs, 80% of households surveyed by Shopmium said they were budgeting for groceries or monitoring their spending more carefully, while almost half (43%) said they were buying and eating less food.

“Times are hard for UK consumers,” says Stuart Sankey, head of Shopmium UK. “The rise in inflation means the majority of households have had to budget or more carefully monitor their weekly supermarket shop, and we’re seeing significant changes to food and drink purchasing habits as people bid to save pennies where they can.”

As is often the case when prices rise, brand loyalty is taking a hit. That includes loyalty to a particular retailer, with 36% of those surveyed by Shopmium saying they had switched to a cheaper supermarket to cut the cost of their weekly shop.

Indeed, Kantar’s latest figures show that while total sales at supermarkets fell by 4.4% over the 12 weeks to 15 May, discounters Lidl and Aldi both gained their highest ever market share of 6.9% and 9.0% respectively.

Elsewhere, over a third of Brits (34%) said they were switching the branded products they prefer for cheaper options, such as supermarket own-label items.

Household laundry and cleaning brands were worst hit by this trend, according to Shopmium’s survey. Almost half (47%) of those surveyed said they had moved away from the brands they once used to lower cost options in this category.

Over one in four (41%) said they were abandoning frozen brands for cheaper items such as supermarket own-brand pizzas and ice cream, while more than a third (37%) said they had switched from branded bakery items to more affordable alternatives.

Alcohol was the least affected category, with just 11% of those surveyed by Shopmium saying they had changed from their favourite booze brand to a cheaper alternative.

Unsurprisingly, Brits are cutting back on eating out in the face of the cost of living crisis, with half (50%) of those surveyed by Shopmium saying they planned to eat at home more over the next few months.

Food delivery services are also set to suffer, with 61% saying they planned to order fewer takeaways to save money, while almost a third (28%) said they would cook from scratch more frequently.

Brits are also cutting back on booze, Shopmium’s survey suggests, with four in 10 of those surveyed saying they had bought less alcohol – or stopped buying it altogether – since the start of the year. That rose to 44% among under-34s.

Elsewhere, over a third (37%) of those surveyed said they were buying less sweets and snacks, while 31% said they had reduced the number of ready meals they bought, or stopped buying them entirely.

More than a quarter (27%) said they had cut back spend on health & beauty products, while 21% said they were buying less meat and fish since the start of 2022.

Under-25s most affected by inflation

Younger generations, who typically have less disposable income, have been forced to change their shopping habits more drastically than those in other age categories.

Over half of those under the age of 35 in the survey said they were buying and eating less, while those aged under 25 were the most likely to plan their weekly shop more, switch to a lower-cost retailer and buy more longer-life food.

In contrast, those aged over 65 were least likely to make changes, with 22% saying they hadn’t adjusted their shopping habits at all.

“With price being the key concern for the majority of consumers, and particularly those aged 35 and under, many of whom are already switching to cheaper food and drinks products, brands face tough competition to remain in the basket,” says Sankey.

“While it may not be viable for brands to reduce the price of their range across the board, it would be wise to consider running promotions on the items consumers are most likely to switch such as frozen foods and breakfast cereals, or on the products they’re specifically seeking such as home cooking ingredients or longer-life items.”