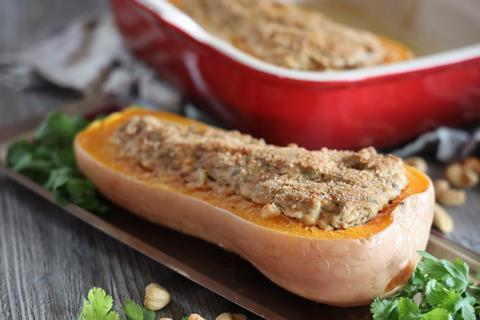 Shoppers are focusing on reducing their environmental impact and meat consumption this Christmas, according to IGD research. They are also planning to spend less on the main Christmas meal.

Sustainability is high on the agenda this Christmas, with 71% of shoppers planning to take a specific action to reduce their environmental impact over the festive season.

Plant-based alternatives have also entered the top five choices for Christmas Day main meal options for the first time this year, coming in above ham, pork, seafood, lamb and salmon.

But despite the view, from 69% of shoppers, that Christmas is a time to splash out, expected spend on the main Christmas dinner will be down by £9 - or £2 per person - the IGD found.

IGD global insights director Simon Wainwright said the number of shoppers intending to visit a specialist store (64%) and farmers’ markets (40%) over the season was up by 6% and 4% respectively compared with last Christmas.

“More shoppers intend to visit specialist stores, such as butchers or greengrocers, farmers’ markets or premium supermarkets, this year than last,” he said. “This is despite the intent to spend less on Christmas dinner, perhaps implying a reduction in quantity purchased in favour of quality.

“Large stores, in particular, could face a challenge here - calling out quality, sustainability and welfare messaging year-round could encourage shoppers to visit these stores more frequently at Christmas.”

UK food and grocery sales are set to reach £21.5bn this Christmas, with 1.2% of growth forecast, the IGD added.

A notable number of households would be reducing the amount of meat they ate this year, with 13% planning to prepare a vegan or vegetarian meal, compared with 9% in 2018, the research revealed.

Ethical considerations are also front of mind, with 88% of shoppers claiming the welfare of animals involved in the production of food and groceries is important to them. Half of shoppers (51%) plan to buy higher-welfare or more premium meats this Christmas.

Despite the increased interest in upgrading meat choices and shopping at specialist stores, the estimated cost of Christmas dinner this year is £80.93, down from £89.68 in 2018. Savvy shopping tactics would play a role here, the IGD said, with more than half of shoppers (52%) shopping in advance of the event to spread the cost, and 74% of those with loyalty cards planning to use their points to save money, find offers or trade up on gifts.

Of the 71% of shoppers who said they were going to take a specific action to reduce their environmental impact over the season, more than half (55%) intended to buy more loose fruit & vegetables. This figure was highest among those aged 55 to 65 (63%) and in Scotland (63%). A third (34%) planned to avoid buying products that had a lot of excess packaging. Additionally, 32% intended to buy more products that were locally produced, and 31% planned to seek out products with easily recyclable packaging.

Wainwright added: “While environmental concerns are clearly important at this time of year, we can see that there is an opportunity for retailers and manufacturers to engage with shoppers more in this area during the season to make it as much of a priority as at other times of the year.

“The focus here should be on taking action to reduce the environmental impact of products so shoppers can buy the gifts they want without compromising on their sustainable ambitions.”