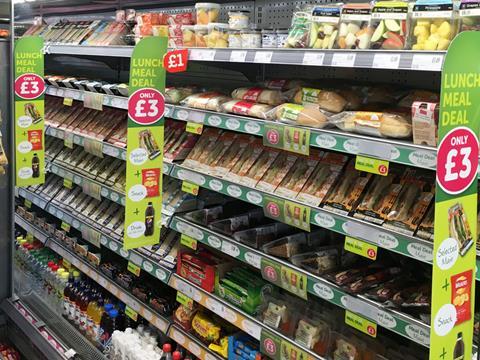 Independent convenience chain My Local has introduced a £3 lunchtime meal deal in a move it believes will prove a major boost to its sales.

At the My Local suppliers’ conference in January, trading director Neil Turton highlighted the lack of a competitive lunchtime meal deal as one of the key reason why sales at the chain had fallen below the levels delivered by Morrisons, from whom My Local bought the 130-strong c-store chain last year.

My Local is primarily supplied through Nisa but the buying group does not have an own-label sandwich offer, which meant that when it took over the stores it was only selling sandwiches supplied by Ginsters. As a result, the cost of buying a sandwich along with a snack and a drink went up by £1 - or a fiver a week - for those shoppers buying their lunch at the stores on a daily basis.

Turton said in January that My Local was looking for a new sandwich provider who could meet the requirements of the deal. It has since agreed a contract with Middlesbrough-based On a Roll to supply a 24-strong range of Pick of the Pantry-branded sandwiches, rolls and wraps with price points of £2 and £2.50, and introduced the £3 meal deal this week.

As an alternative to sandwiches, shoppers can also choose from a small range of pasta pots retailing at £1.50 and four salads ranging from £2 to £2.50.

“This is an important step for us in building back the loss of trade and is also good news for On a Roll, which has significant increased production as a result of the new contract,” said Turton.

Helen Stoddart, co-owner of On a Roll, told The Grocer that its production had increased by 15%. “This is a fantastic contract for us and orders have increased every day due to the quality of the product.”