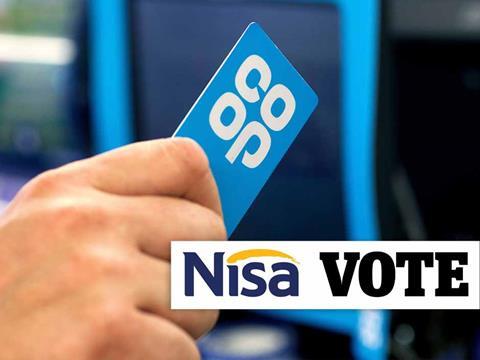 The Co-op bid was approved by the narrowest of margins

Nisa members have today accepted the Co-op’s £137m bid for the buying group at a historic vote for the UK convenience sector.

At a special meeting of Nisa’s members to decide on the group’s future at Leeds United’s Elland Road ground – the Co-op bid succeeded by the narrowest of margins.

“We are delighted that our members have chosen in such significant numbers to vote in favour of Co-op’s offer. We as a Board are firm in our belief that a combination with the Co-op is in the best interests of Nisa’s members”

The offer requires clearance from the Competition and Markets Authority, which is expected around the end of March next year. However a good indicator of how the watchdog will view the deal could come as early as this week when the CMA publishes its findings into Tesco’s £3.7bn takeover of Booker.

“We are delighted that our members have chosen in such significant numbers to vote in favour of Co-op’s offer. We as a Board are firm in our belief that a combination with the Co-op is in the best interests of Nisa’s members, said Nisa chairman Peter Hartley.

”The convenience store environment is changing rapidly, and is unrecognisable from that which existed when Nisa was founded more than 40 years ago. Co-op will add buying power and product range to our offering, while respecting our culture of independence.”

Co-op Food CEO Jo Whitfield said: “We are delighted that Nisa members have supported our offer and our ambition to create a stronger member-led presence within the UK convenience sector. Together Co-op and Nisa can go from strength to strength, serving customers up and down the country and creating real value for them in their communities. Our offer remains conditional on CMA approval and we remain in discussions with them.”

The vote has been welcomed by other souces close to Nisa.

”I’m absolutely delighted,” said one. ”It’s the right thing for Nisa, and for the vast majority of its shareholders. As usual the ‘no’ protagonists did a very good job of making their voices heard, but 75% was a very high hurdle and by dint of getting to 75% it is a true reflection of the wishes of the vast majority of Nisa members.”

Co-operatives UK chief operating officer  and former Nisa CEO Neil Turton said: ”Despite the controversy attached, I think it’s a very good strategic decision. Nisa needs a scale partner and the mutual values of the cooper combined with a better fresh offer are the best fit of any possible partners. I’m delighted with the outcome, which I genuinely feel is in the best interests of forward looking members.

”The other pleasing aspect of this deal is in terms of governance. Nisa needed reform”

”The other pleasing aspect of this deal is in terms of governance. Nisa needed reform. I’ve been impressed by the Co-op’s commitment to its member council. It is genuine, and the democracy with which CEO Steve Murrells and Nick Croft (president of the Co-op’s members’s council) lead it, shows proper commitment. Nisa members will really benefit from that.”