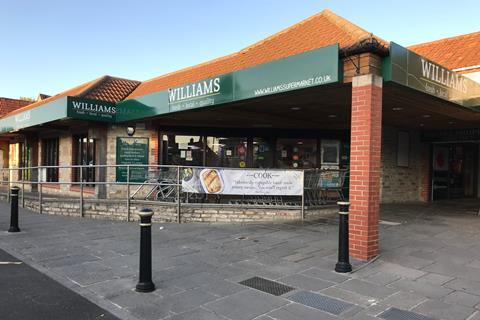 The 9,500 sq ft Williams Supermarket will be relaunched as Co-op Somerton

The 9,500 sq ft Williams Supermarket in Somerton will be relaunched tomorrow (24 October) as Co-op Somerton.

Somerton Co-op will be the society’s eighth franchise store. It currently operates three with Costcutter in company-owned stores and has four in university campuses across the country.

The opportunity to become a Co-op franchisee was a key pillar of the Co-op’s offer when it acquired buying group Nisa for £137m in May 2018.

Williams, who bought the store in 1996, told The Grocer the model suited him as he and his wife were keen to retain ownership but step back from the all-encompassing day-to-day running of an independent supermarket.

The store will become a full service Co-op and will be fully stocked via the Co-op automated ordering service. The conversion will also see the introduction of self-service tills.

However, Williams said he expected the increased automation would have a positive impact on employment at the store by “driving increased sales, but allowing staff to spend more time delivering meaningful customer service and community support”.

Williams employs 38 staff, who will all remain at the store following the conversion. They have all gone through fully immersive training sessions over the past few months to be able to deliver the Co-op offer.

“For me the staff are the heart of the store and they are all still there,” he said. “Some have been here for 18 years. We were wholeheartedly behind the Co-op acquisition of Nisa and since we had the Co-op own brand range in store like-for-like sales are up 7%.

“After 24 years we had to look to the future and we are really excited to become the first Co-op franchisee from Nisa.”

Williams signed up to the move when the Co-op launched its franchise plans in February. Co-op head of new channels Martin Rogers confirmed there was lots of interest from other Nisa retailers.

“I think there has been an element of people not wanting to be the first to go for it,” he said. “But I imagine now that more people see it working well for Richard, others will come on board. Richard is a well-known and influential retailer, particularly in the south west, and so I expect this will definitely drive even more interest.”

Last month the Co-op signed a deal with the National Union of Students to become the exclusive retail grocery franchise partner for members’ campuses. It said the deal could see it serving seven million students with groceries and services over the next five years.

In April, Co-op Group CEO Steve Murrells said the franchise model could grow to 200 outlets over time and 20 by the end of this year.

Rogers admitted that it would not hit 20 franchises by the end of the year. “At this stage it is about quality rather than quantity,” he said.