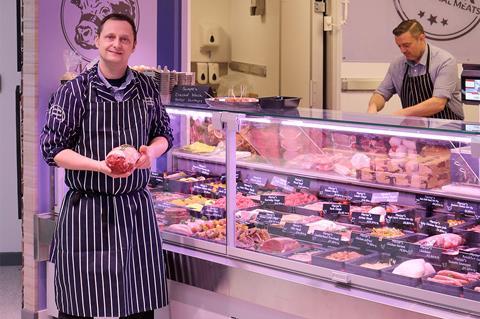 Spar retailer Lawrence Hunt has spent £300,000 refurbishing one of its oldest stores, with the addition of a butchery concession and the creation of 10 jobs.

The Lancashire-based retailer has completely remodelled its Broadfield Drive store in Leyland, which has been in its estate since 1973. It has introduced a local butcher, Mark Mercer of Mercers Meats, to the family-run business for the first time.

The new-look store now boasts a ‘Daily Deli’ with hot food to go, a Franke coffee machine, a post office and a wider local produce offering among an extended product range.

The new store was officially opened by the mayor of South Ribble, Mick Titherington, on 28 March.

Lawrence Hunt, which employees 500 staff, has now remodelled 19 out of its 27 stores, offering nine Post Offices and three Subway outlets between them.

The retailer plans to roll out more butchery concessions if this proves a success, and a florist, along with other shopping mission drivers.

“When we discussed refurbishing the store, I knew that I wanted to include a butchery concession and expand our current local offering,” said Kevin Hunt, owner of Spar Broadfield Drive. “Mark is originally from Leyland and after having our initial conversation, we were both really excited at the thought of bringing a high-class, quality butcher back to the town.”

Kevin explained: “Mark has built his reputation on delivering local quality meat and produce: he buys all of his free-range turkeys from Longton, lamb from Withnell and the 28-day dry-aged beef comes from a third-generation Leyland farmer, who farms near Bamber Bridge. We are delighted to be able to offer such a range of local products in store and are really looking forward to working with Mark and his team. Through the refurbishment, we have also created 10 new jobs for local peopl