Pipers to take on Kettle and Tyrrells with big four expansion 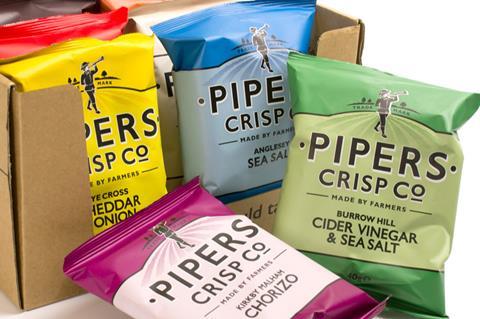 The brand has quietly rolled into Sainsbury’s

Pipers Crisps looks set for a showdown with Tyrrells and Kettle in the mults.

The PepsiCo-owned brand – which its co-founder said over a decade ago would “never be seen in Tesco” – has quietly rolled four of its flavours into Sainsbury’s. They are: Wild Thyme & Rosemary, Cider Vinegar & Sea Salt, Cheddar & Onion, and Chorizo.

The brand was also recently sold in Tesco through a WIGIG promotion, although it has no permanent listing in the supermarket.

Pipers has been sold in Ocado and Booths for some time, but this move marks a milestone foray into the big four.

PepsiCo snapped up Pipers last year in a deal reported to be worth some £20m.

The deal was cleared by the Competition & Markets Authority, and gave PepsiCo a greater foothold in the hand-cooked premium crisps category. In its verdict, the watchdog cited Pipers documents that “discuss a plan to grow its position in grocery retail”.

Indeed, the Pipers brand has historically had a much larger focus on pubs, bars and restaurants than retail.

At the time of the deal, one source suggested to The Grocer it could be viewed as recognition of PepsiCo being “underweight in foodservice”.

However, many on-trade suppliers have turned to retail and DTC over past months to recoup losses sustained with the shutdown of pubs and bars due to the coronavirus crisis.