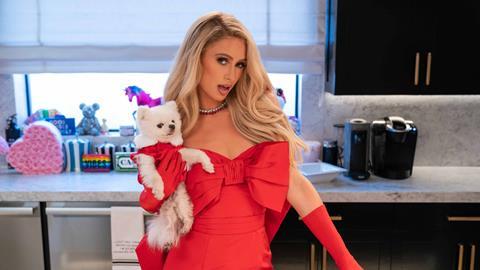 Cooking with Paris: advice thin on the ground in deadpan brunch date

Experience, talent and taste aren’t everything when it comes to cooking shows. If Snoop Dogg, James May and Gregg Wallace can do it, why can’t, say, Paris Hilton?

Indeed, as the socialite, reality queen and erstwhile pop star is big enough to admit at the start of Cooking With Paris (Netflix, available now), “I’m not a trained chef”.

The series sees Paris, who tells us she is planning a family, determined to improve her culinary skills, with the help of some celebrity chums. Each tackle a particular meal or cuisine.

First up, breakfast. Cereal-loving Paris takes it seriously, filling her house with balloons to evoke the marshmallows in Lucky Charms, and planning a matching outfit. She is to be joined by Kim Kardashian West, and gets ahead the night before by microwaving some marshmallows, adding blue food dye and edible glitter… and wandering off.

Fortunately, by comparison Kim is a regular Fanny Cradock. “This looks like slime,” she declares the next morning of the marshmallow effort, but the pair manage to form some rudimentary shapes, which Paris toasts with a blowtorch.

They then knock up a tasty-looking ‘frosted flakes French toast’ and a frittata, which they share at the show’s close over some exquisitely boring stories of their “wild” youth. “This is like so professional,” notes Kim. “Literally,” acknowledges her pal.

As in her reality show The Simple Life, Paris knowingly plays up to her Barbie doll image, insisting on preparing food with a serious manicure and lace gloves, and providing deadpan ‘cooking tips’ like “these are tongs”.

So we don’t learn much, but it’s fun seeing Paris’s pals manage her ineptitude. And at least her reliable catchphrase “that’s hot” makes sense – as she says, “literally”.