Nigella: At My Table - a masterclass in bored artifice 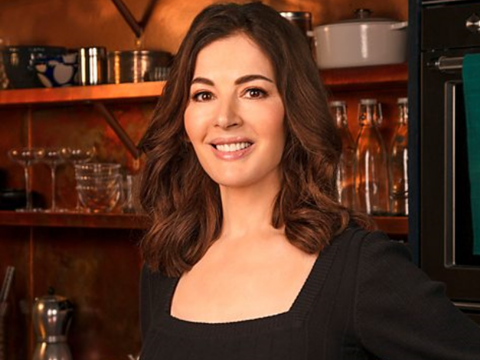 Between reality and its representation there is a yawning chasm. Into it fall the TV programmes of Nigella Lawson, in which we are asked to believe that yes, this really is Nigella’s kitchen, these photogenic people really are her family, and a TV crew really are in her kitchen on the off-chance she’ll fancy cooking a quick snack.

Nigella: At My Table (BBC2, 30 October, 8.30pm) is a masterclass in bored artifice. ‘Life can be complicated, cooking doesn’t have to be,’ says Nigella, soupily looking into the camera at a few million middle-aged men who are smiling like people who meant to take aspirin but have imbibed a near-lethal dose of morphine instead.

The kitchen goddess blazes through recipes that generally start with a knob of butter the size of Sussex and end with something clever involving sea salt flakes, and the obligatory shots of Nigella herself messily eating the food.

Nigella briefly goes out to buy flowers, a Mrs Dalloway for our times, before entertaining some people come from a casting agency in ‘the garden’. Because this is Nigella, we’re talking a set dressed to within an inch of its life with twinkly lights and candles, not somewhere the grass needs cutting and the mower has been pushed half out of shot.

The producer shows us Nigella in a silk robe at the bottom of the stairs talking about brownies and then we’re done, set up for next week, where Nigella joins a death metal band and cooks corned beef hash. Not really. It’ll be more of the same, repeated ad nauseam, until the end of time.