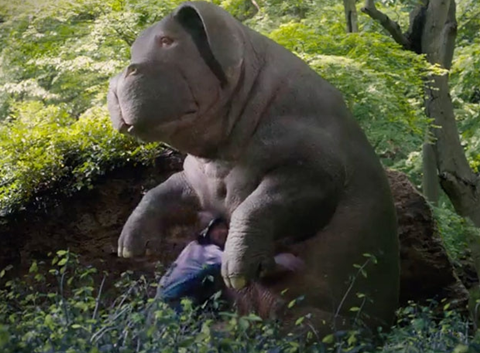 Big business beware, the newest addition to the Netflix hall of film, Okja (available now), is out to get you. It won’t seem like it at first. It’ll start cute, cuddly and picturesque, set in the rolling hills of South Korea where giant GM ‘super pig’ Okja frolics with her best friend Mija.

It’ll reel you in with its fluffy super pig competition and comical corporate CEO (played by the brilliant Tilda Swinton). You’ll laugh. We look harmless, and ethical, and environmentally aware, you’ll say. This is fantastic for global food conglomerates.

But then in marches the Animal Liberation Front. The corporate bods releasing tranquiliser guns on a terrified Okja as she stumbles through a Korean shopping mall. The hidden cameras revealing cages of disfigured animals, GM experiments gone wrong with blistering lesions and pained squeals. The frantic PR cover-ups in skyscraper boardrooms. And the brutality of a fictional slaughterhouse packed with wailing giant pigs, sent packing one shot at a time.

“This is business,” might work for a wild-eyed Swinton but it won’t undo the damage of this beautiful, brutal film for big business and backers of GM livestock. Okja might be mythical, a creation borne from the fantastical mind of director Bong Joon-ho, but to viewers sobbing into their popcorn she’ll be all too real.

And if the corporate face of food fails to see it coming, they’ll be trampled under Okja’s giant GM trotters before they can load up their Netflix.