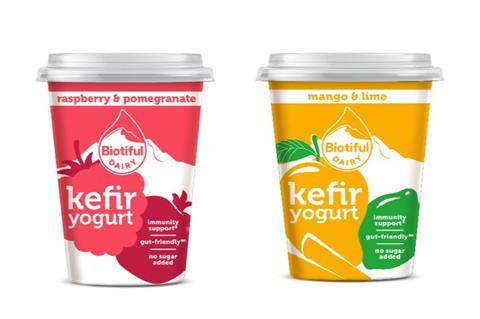 Biotiful has announced its third major NPD launch of 2020, with a new range of kefir yoghurts as it seeks to broaden its appeal.

The gut health-focused brand, which has already moved into cheese aisles and shot formats this year, said it aimed to appeal to a wider audience and more eating occasions through the launch.

“With immunity and gut health higher on the consumer’s agenda than ever, we’re delighted to be able to bring our expertise in kefir making to the yoghurt category,” said Biotiful’s founder, Natasha Bowes.

“Our aim is to cater for more occasions and consumers looking to upgrade their yoghurt with a product that combines the very best in nutrition, quality and taste. With this latest launch we believe there is a huge opportunity to drive further growth and appeal to an even wider audience.”

The launch comes after the brand rolled out its largest above-the-line marketing campaign to date at the end of September.

Running for 10 weeks, the campaign has sought to highlight the brand’s core message of ‘immunity support, naturally’ with the aim of recruiting new shoppers to the category.

The advertising push has taken in slots on Smooth FM and Magic FM, as well as influencer-led content on social media.

Biotiful has also partnered with meal kit provider Hello Fresh since 5 October. The tie-in has seen the delivery of 10,000 samples across London in a bid to demonstrate the “versatility” of Biotiful’s products as an ingredient, the brand said.