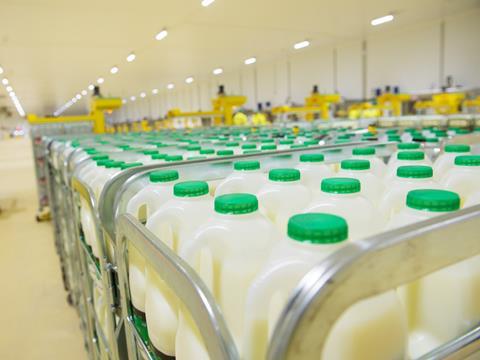 The ongoing slump in global dairy commodity markets has led to a swathe of further cuts to farmgate milk prices over the past week, prompting warnings over future supplies of British cheese and yoghurt.

With milk production set to ramp up over the coming month due to the spring flush, further exacerbating the industry’s supply/demand imbalance, Tesco this week slashed 1.39ppl off the price paid to its aligned pool of dairy farmers for the three months from 1 May, down to 28.69ppl.

Dairy co-op First Milk cut its farmgate milk price for April by almost 1ppl in some areas citing “weak market conditions”. Its farmers on the Isle of Bute saw their price cut by 0.95ppl to just 15.93ppl.

Arla and Müller announced last week they were cutting their standard milk prices to 20.87ppl and 19.54ppl respectively, while South Caernarfon Creameries, Glanbia Cheese, Lactalis’ Fresh Milk Company and a host of smaller processors also made cuts to their milk prices.

Dairy farmers faced little prospect of a recovery in the short-term, said NFU dairy board chairman Michael Oakes. “I can’t see any prospect the market will change in this calendar year,” he warned. “Production has started to drop, but the spring flush traditionally brings with it an increase in supply, which is the last thing we need given there are also abundant stocks of butter and powder in storage.”

Farmers outside of aligned pools would now be “making tough choices”, said Oakes.

Although liquid milk supplies to UK supermarkets were reasonably well protected, there was a “real danger if this crisis goes far enough there may not be enough milk to satisfy the demand for UK dairy products such as cheese and yoghurt,” he warned.

Industry commentators branded the data misleading as Defra had included Arla’s 13th monthly payment - which is paid to members every February - in the statistics.

Dairy sector analyst Chris Walkland said the pricing data was “absurd”. He suggested average prices for non-aligned dairy farmers was closer to 20ppl, adding “to suggest the milk price has gone up by 10.8% is off the scale of lunacy”, painted a “wholly inaccurate picture”. and meant consumers could be misled into thinking the dairy sector had recovered.

However, Defra defended its reporting of the data, by insisting the increase in February’s figures “reflects the inclusion of annual bonus payments made to some producers”, and had been clearly signposted.