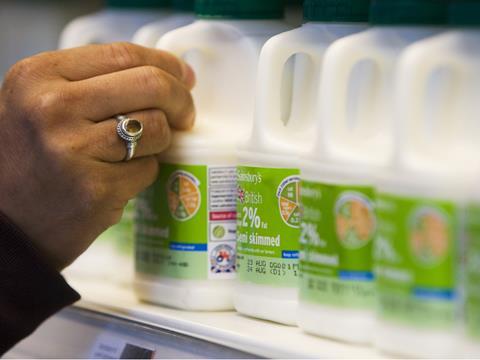 We pay our suppliers some of the highest prices in the UK milk industry,” Tesco’s new in-store marketing push proudly informs shoppers. Not that shoppers appear to be taking much notice. Because although Tesco is indeed one of the price leaders as far as liquid milk is concerned - paying the third-highest farmgate price, behind Marks & Spencer and Waitrose - the general public seems to see it as a milk price baddie. In an exclusive poll for The Grocer by Harris Interactive, a whopping 25% of consumers picked Tesco as the retailer paying farmers the least for their milk.

Other supermarkets aren’t faring much better. Sainsbury’s has been shouting about its generous farmgate milk price in a high-profile press campaign recently but just 7% of shoppers see it as a price leader - behind six other retailers including The Co-operative and Asda. Even Waitrose and M&S aren’t getting the credit they deserve, with consumers believing c-stores and independents are more generous milk payers than either retailer.

So why are consumers’ perceptions out of whack with reality? And what can retailers do to better get the message across?

In Tesco’s case, the recent deluge of headlines about the business more generally - including its £263m accounting scandal - is likely to blame, believes Lucia Juliano, head of fmcg and retail research for Harris Interactive. As a result, messages promoting its work with the Tesco Sustainable Dairy Group (TSDG) have simply been lost, “most likely muddied by recent negative press coverage”, she says.

This suggests Tesco should find it easier to push milk price-related messages once the headlines have calmed down, but that’s no reason for complacency. Paul Williams, creative director for branding consultancy Springetts, says all the major retailers could do more to communicate effectively with shoppers. It’s about “telling new stories” using different formats, he says. “The retailers should look at the structure of bottles, and how they can deliver these messages on packaging.”

How much work supermarkets have to do in this regard is highlighted by how well c-stores and independents fared in our poll. Industry feedback suggests the sector pays only between 23 and 24 pence per litre for liquid milk - significantly less than most of the major mults. “This middle ground is absolutely cut-throat, with historically low farmgate prices from processors,” says Hamish Renton of Hamish Renton Associates. “However, it’s not a huge surprise that consumers think they pay the most, as the usual presumption with these stores is they are more local and closer to the farmer.”

The mults themselves seem nonplussed about the results of the Harris poll. Tesco would only reiterate its continuing commitment to “communicate to consumers” about its dairy development group, while Sainsbury’s says it has received a “very positive response from customers and farmers” following its recent ad campaign.

Meanwhile, Asda says it prefers to focus on “facts” instead of perceptions.

“Whilst perception is interesting, when it comes to important people like our farmers, we look at facts,” says a spokeswoman. “Our milk is supplied by the Arla farmer co-operative, which means the price received by our farmers is set by their own co-operative business.”

Of course, retailers don’t put in place dedicated dairy farmer groups and milk price premiums purely to appeal to consumers - they are first and foremost an important way to safeguard supply - but industry experts nevertheless fear retailers could lose their appetite for paying price premiums if consumer recognition isn’t forthcoming. “Given these results, what benefit is there to Tesco to continue paying its farmers these prices?” warns dairy commentator Ian Potter.

Running out of steam?

Effective consumer communications on farmgate prices isn’t the only challenge. Shopper enthusiasm for cheap milk also appears to be waning.

Harris this month re-ran a poll on attitudes to cheap milk for The Grocer - first conducted in March 2014, when the milk price war kicked off - and shopper support for milk price cuts is down significantly year on year, while concern about the impact of the price war on farmers and cow welfare is up.

For example, 60% of shoppers polled this year said they were concerned about the effect of retail price cuts on farmers (up from 54% last year), and 60% said the mults should prioritise cutting prices on products other than milk (also up from 54% in 2014). And 37% agreed this year 89p was too low a price for four pints of milk; last year - when asked about £1 for four pints - just 29% said this was too low.

“The most common consumer response last year to price cuts was a positive one,” says Juliano at Harris. This year, consumers are markedly less positive. “It appears media coverage of fair pricing for farmers has started to leave an imprint in consumers’ consciences and that we are all rather more concerned about farmers than we were this time last year.”

All the more reason, then, for retailers to make sure they really get the message about fair prices to farmers across.