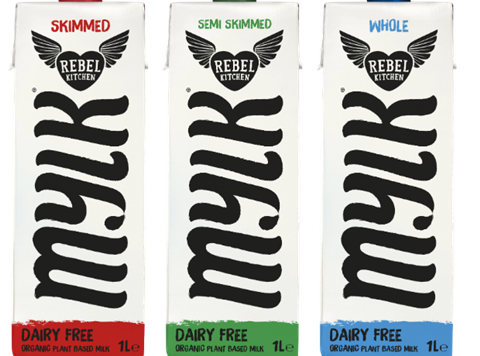 The NPD is an extension of the brand’s Mylk range. It launched this week in whole, semi-skimmed and skimmed variants, complete with blue, green and red tops, so as to allow consumers to choose their preferred fat content and “shop in the same way they would with milk”, said the brand.

The non-dairy drink contains six ingredients, with coconut cream to mirror the richness of milk, brown rice for sweetness, and nutritional yeast for “grassy notes”. The amount of coconut cream differs in each variant, from 8% in skimmed to 25% in whole (rsp: £2.99/one litre).

Mylk marked “the next step in innovation for the free-from milk category”, said Adam Thompson, commercial director at Rebel Kitchen. “Never before have consumers been able to shop this category like the traditional dairy aisle.”

The product would be “a contender for dairy sales in the same way meat-free brands now make most of their sales from a non-vegetarian consumer base”, he added,

Tamara Arbib, co-founder and MD of Rebel Kitchen claimed Mylk would “question the norm” in the dairy alternative aisle. “We’ve all grown up with shopping the milk aisle based on our preference for the red, green or blue tops. But when entering the plant-based arena, you had to make a decision from almond through to soya. None of them really deliver on taste - until now.”

Rebel Kitchen launched its Mylk range in January 2014 a flavoured milk alternative. The latest addition was “a separate offer in terms of recipe base” said the brand. “Mylk 1L can be used as a dairy milk would, whereas the RTD flavoured Mylks are to be enjoyed on their own.”