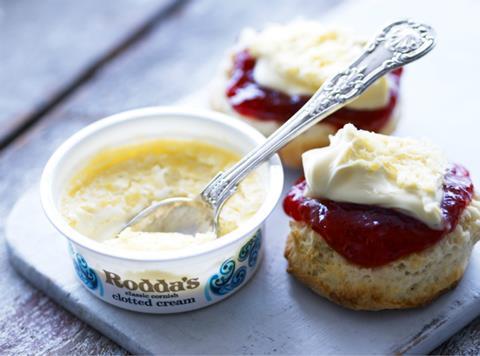 Cornish clotted cream producer Rodda’s has secured a deal to supply its product across Australia for the first time.

The first deliveries of the PDO-accredited clotted cream were set to arrive in Australia this week as part of a distribution deal with British cheese and dairy exporter Somerdale International.

It would be made available to high-end retailers, delis, hotels and cafés initially in New South Wales and Victoria. In due course, Rodda’s lines would also be sent to distributors in Western Australia and South Australia, it said.

The cream is transported to Australia frozen, before being gently defrosted and sent out to customers and distributors. It will be available in 20g individual portions, 113g retail packs and 907g foodservice packs.

“The quality and taste of Rodda’s Cornish clotted cream combined with its PDO provenance means that there is nothing quite like it in Australia,” said Di jones, head of Somerdale’s Australian operations.

“We are seeing a growing demand in Australia for premium products with a distinctive taste and authentic provenance. Although customers will naturally look to purchase Australian produce if they can, they are willing to try imported products if there isn’t a comparable locally produced product.”

She added: “At the same time, high-end hotels, cafés, cruise ships and premium airlines are now making cream teas part of their food offer and the ability to add value by offering authentic Cornish clotted cream will be attractive to them, thereby increasing demand.”