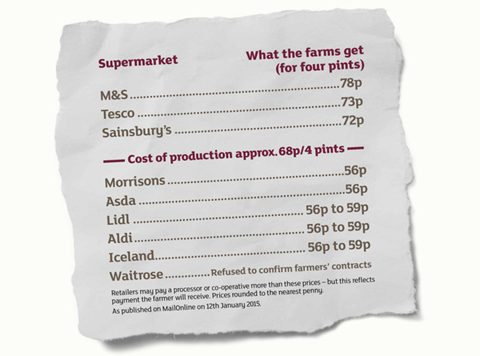 Newspaper readers are likely to have come across a rather unusual Sainsbury’s ad this morning.

In an unprecedented move – and under the headline ‘We believe the farmers who produce our milk should also make a living’ – Sainsbury’s cited research undertaken by the Daily Mail that revealed what the supermarkets were paying dairy farmers for their milk.

Sainsbury’s came out better than most of its competitors in the research, with members of the retailer’s Dairy Development Group receiving 72p for four pints of milk (the equivalent of 31.72 pence per litre). But Sainsbury’s did not fare better than them all – placing third behind Tesco (at 73p) and M&S (at 78p).

Sainsbury’s was obviously happy to run the risk of a few conscientious shoppers heading to Tesco or M&S in order to make consumers aware it paid farmers more than the 68p average cost of production of four pints of liquid milk, more than the majority of its rivals, and significantly higher than the farmgate price currently paid out by the major dairy processors.

In an accompanying online blog, Sainsbury’s food commercial director Paul Mills-Hicks said the 300-strong Dairy Development Group “will receive a higher price than they would in the open market”

Such claims - which follow a similar PR exercise by Tesco last week - have opened up an interesting new front in the supermarket price war.

The ad appears to be a concerted attempt to separate Sainsbury’s from the likes of Morrisons, Asda, Lidl, Aldi, and Iceland when it comes to paying farmers a sustainable price for their milk, at a time when the public is becoming more switched on to the subject.

Retailers’ sourcing practices could become a new weapon in the battle for market share, a dairy industry expert told me this week. Sainsbury’s had “crossed the Rubicon”, he said, adding that the tactic of denigrating a rival’s sourcing practices for milk, and the price they paid for that milk, could become a big differentiator for consumers becoming increasingly aware of the plight of dairy farmers.

This plight will have been reinforced this week after MPs on the Efra Committee called for the Groceries Code Adjudicator’s remit to be extended to the dairy sector, and Sainsbury’s ad could have placed its rivals under a potentially uncomfortable spotlight.

This additional scrutiny could also raise additional questions about pricing practices in categories such as butter and cheese, and whether farmer groups guaranteeing to pay the cost of production as employed by Tesco and Sainsbury’s, could be extended to non-liquid milk products.

With no sign of any short-term improvement in global dairy prices, it seems the ethical sensibilities of shoppers could well have an important part to play.