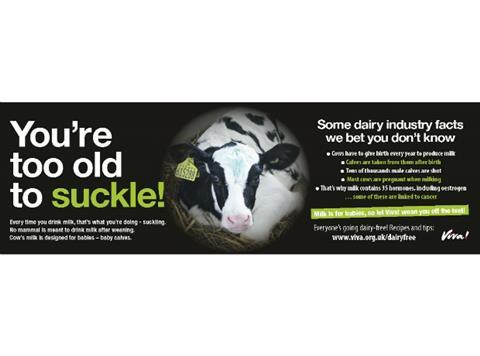 Vegan campaigners have launched a new anti-dairy campaign with a series of adverts on buses in Bristol and London urging consumers to “ditch dairy”.

The campaign, by Viva!, carries two separate ads outlining “shocking facts” about the dairy industry, and reiterates the claim that “some of the hormones naturally present in all cow’s milk are linked to cancer”.

“The aim of the adverts is to highlight that people are not meant to consume cows milk,” said Viva! campaigner Veronika Powell. “We also want to educate people about the sad realities of the dairy industry. The life cycle of a dairy cow is a continual exploitation of the female reproductive system. She is artificially inseminated at a young age, carries her baby for nine months, only for the calf to be ripped away from her hours after birth.”

Powell added that the charity’s campaign was meant to make people “look and think” about where dairy products come from and how they affect human health.

“Male calves are useless to the industry and they are shot shortly after birth or used for veal or cheap beef,” she claimed. “Female calves face the same fate as their mothers - a lifetime of pregnancy and exploitation. These practices are standard across the dairy industry, regardless of whether the dairy farm is organic or zero-grazing.”

The ads will be shown on 200 London buses and 50 Bristol buses during the next four weeks.

It follows a series of attacks on the dairy sector from the vegan lobby this year. As The Grocer revealed earlier this month, Dairy UK and AHDB will launch a major consumer-facing marketing push this autumn, which will seek to re-establish the sector’s credentials.

Dairy UK CEO Judith Bryans said: “Consumers should be assured that there is no scientific evidence to show that milk gives you cancer, any information to the contrary is misleading and inaccurate.”