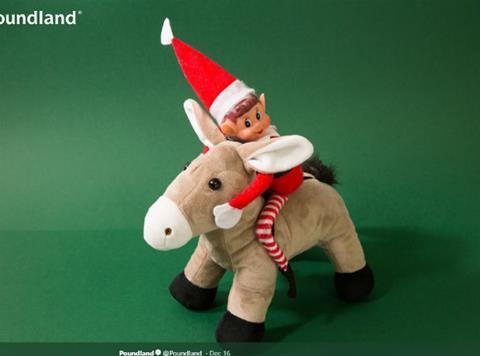 The Advertising Standards Authority has consigned the naughty antics of Poundland’s rampant elf to the sin bin following its controversial Christmas marketing campaign.

The naughty toy featured in a series of sexually suggestive posts in its campaign, primarily on Twitter and Facebook.

One was of the elf dangling a teabag between its legs over a female doll wearing a t-shirt with the word ‘power’, and captioned ‘How do you take your tea? One lump or two?’ Twinings, whose tea featured in the post, was unimpressed and demanded the removal of its branding.

The ASA investigated the series of nine ads including one featuring an image of a toy elf playing a game of cards with three unclothed dolls. The caption stated ‘Joker, joker. I really want to poker’.

Another featured an image of the toy next to a drawing of a phallic-shaped tree with the caption ‘That’s one very prickly Christmas tree’.

Poundland said the elf campaign was based on humour and double entendres that children would not understand and it had not intended to offend anyone.

It also argued Twitter and Facebook had policies that prevented under-13s from creating accounts on their websites and it had never sought to encourage anyone other than adults to follow the retailer on these social networks.

But the ASA said Poundland’s Facebook and Twitter pages were not age-gated and could therefore be seen by anyone and shared more widely.

“We considered the depiction of a child’s toy in relation to such sexual references and acts in a medium that could also be accessed by children was irresponsible and likely to cause serious or widespread offence, therefore breaching the advertising code, it said.

The ASA ruled that the ads must not appear again in their current form and it told Poundland to ensure its advertising was presented with “a sense of responsibility” and did not cause serious or widespread offence.

However Poundland is taking the rebuke in its stride. It posted an image of said elf behind bars in his cell at ‘Wormwood Scrubbers’.

A statement from the naughty elf said: “Britain’s the home of saucy postcards, Carry on films and panto, so I’m sad the ASA found my double entendres hard to swallow.

“At least it’s only 84 people who had a sense of humour failure compared to the tens of thousands who got the joke and liked and shared my posts online.

“I’m doing everything I can to get out on good behaviour later this year. Love, Elfie x.”