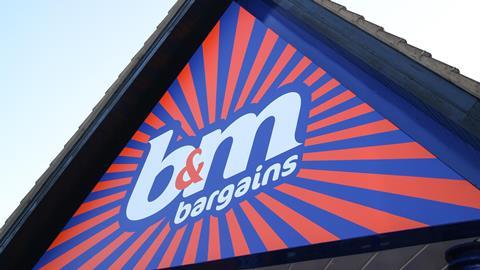 How discounter B&M broke into the FTSE 100

B&M was loss-making and relatively little known when Simon and Bobby Arora bought it in 2004. How have the brothers transformed it?

Even Simon Arora, who bought B&M in 2004 with his brother Bobby, did not anticipate the monumental scale of the variety discounter’s future success.

Back then, it was a little-known regional discount chain with just 20 stores and six buyers. The brothers quickly put the business on a trajectory of growth, and in 2010, after opening a store a week for 30 months, Arora said: “Our analysis suggests we could get to 400 before we reach saturation.”

It’s gone a little further than that. B&M now has more than 650 stores, rising to over 900 counting Heron Foods. Earlier this month, six years after floating on the London Stock Exchange, it broke into the FTSE 100, following a 17% rise in its share price since the start of the year. That’s the year 2020 – a year that has already seen 125,000 retail jobs lost and 14,000 shops closed for good, according to recent data from the Centre for Retail Research.

So, what is behind B&M’s success? There are short-term and long-term answers. With an extensive ambient food and fmcg range, B&M has continued to trade in lockdown, but it’s the full breadth of the offer, rather than the grocery range itself, that has delivered much of the growth.

“They’ve benefited from being open, of course, but they’ve also benefited from playing into consumer trends,” adds Porteous. “Customers are able to go there and shop a lot of different categories, whether it’s garden, DIY, grocery, home or toys.”

Food and grocery has grown over the years to account for about 50% of B&M’s offering, according to analysts, up from perhaps 25% at the beginning, but, just as in lockdown, it would be a mistake to link its success directly to its grocery range. Rather, it is the multiple shopping mission that is at the core of B&M’s model at all times.

In some non-food categories, numbers soar even higher. “They’re a destination for toys now,” says Porteous. “With Toys R Us falling away, these guys have a 9%-10% market share.”

A bit like the German discounters, B&M keeps the general merchandise offer fresh by introducing 100 new lines a week, according to its 2020 annual report, which talks about the importance of “impulse buying or treasure hunting”.

“It makes it exciting for male shoppers,” says David Sables, CEO of Sentinel Management Consultants. “I really want to go because they might have a speedboat in there today.”

Of course, the offer is value-focused. “They are effectively the Aldi and Lidl of the non-food world, focused on ordering high volume per line on a reduced number of SKUs in order to get an efficiency in the model and pass that on to consumers in good value,” says Porteous.

A low price could bring with it doubts about the quality of the ‘speedboat’ or, more realistically, some home electricals or furnishings. It is in overcoming this that the food and GM offerings work so well together, he says.  Unlike grocery discounters Aldi and Lidl, B&M’s food range is all about brands. It’s the fascia’s strapline: B&M, Big Brands, Big Savings. “They are known to be purveying trustworthy big brands and not many discounters are doing that,” says Sables. “Those that do might include Home Bargains, but B&M have occupied that space really well and succeeded because of it.”

Customers trust the big brands they see in B&M’s food aisles and, by extension, the non-food products, Sables argues. “They’re attracting people with fantastic prices on non-food cheap goods but achieving the trust through the big brands,” Sables adds. “That’s how I see their success.”

The Aroras have focused on branded fmcg from the beginning, but in recent years the business has found better ways to do it.

“If you go back five or seven years ago, B&M was really a clearance house,” a supplier source tells The Grocer. “If you had a 10,000-case overstock of product X, perhaps short-dated so you couldn’t give it to the grocers, you’d sell it to brokers and they’d go off and do business with B&M. You’d go into a B&M and go: ‘Oh, there’s that stuff that we sold to someone else.’

“Over time they punched their way out and became more meaningful, and you actually started to say, OK, they are a customer now, we’ll do business with them directly.”

Even so, many brands continued to only sell B&M their excess stock, albeit directly, cutting out the broker. “I reckon about 50% of the stuff in their stores would still be a one-off spot buy at a super-duper price,” rather than a consistent supply, the source says.

“As a brand, you didn’t really want to be in places like B&M,” the source explains. “When the Tesco buyer does his once-a-fortnight trip around competitors, and goes into B&M, and sees something priced lower than he’s ever had it, that is a problem. A Tesco buyer will use that as ammunition to try secure a better price.”

But as discounters have grown, brands have found ways of spoiling that ammunition by creating SKUs specifically for discounters, so comparisons are not like-for-like. Pack sizes have changed. “Then you can say it’s a different format, a different shopping occasion,” says the source. Sub-brands have been developed – think Simply Duracell.

As a result it’s “much more prevalent now for brands to have a strategic alliance with B&M,” the source says, selling it what it wants, when it wants it, in a relationship that has brought with it refreshing simplicity.

“There are no complicated terms or promotional costs,” another supplier source says. “It’s just a straight net price, which is good because you know exactly what you will realise on a deal.”

Ged Futter, director of The Retail Mind, which trains suppliers on GSCOP, says: “Everyone I’ve ever spoken to just talks about simplicity and how easy it is [to deal with B&M]. The major multiples have reams of people that get involved, be it product managers, technical, supply chain, marketing – there could be hundreds. Whereas with B&M you’ll have a buyer who looks after an area, wants a product, and agrees a price.”

A simpler organisational structure than the mults will also make B&M better able to build relationships with suppliers, Futter argues.

“You’ve probably got seven or eight different layers and certainly at junior level they’re moving around all the time. They don’t build up relationships with suppliers. They’re quite young and don’t know how to in quite the same way. That’s what retail is all about. To be a good buyer you need extremely good relations with your suppliers and you have those relationships not just for when times are good but when they’re bad. You know both parties rely on each other and you can have honest conversations.”

B&M came second from bottom in the Groceries Code Adjudicator’s 2020 ranking of 13 major retailers for GSCOP compliance, based on a supplier survey. But it also marked B&M’s first year within the scope of the survey – it was added by the CMA in November 2018 after turnover breached the £1bn threshold. As such, it should not be taken as a full picture of supplier sentiment towards B&M, argues Sables.

“The truth is, until you’re under the microscope of GSCOP you don’t really know what you’re doing wrong,” he says. “I’ll think you’ll find they quickly leap up the GCA’s loveliness list.”

In fact, “brands love them,” says consultant John Butler. “They’re just open with the brands, saying we’ve got the stores, we’ve got the space, what can we do?”

There are limitations to the appeal of the simplicity, though, says our first supplier source. “With Tesco or Sainsbury’s there are a whole load of complications – promotion on shelf compared to a gondola end, and front-of-store display, what do the costs look like? – but your returns are better.

“The rub of the green as a supplier is that B&M will be a low-margin customer because they’re a discount operation, so the more growth goes through them as a proportion of your business, the more margins get diluted. So that’s a tricky one.”

It means the reservations of big brands may not be fully overcome just yet, but if it is a limitation for the model, the Aroras do not appear in a hurry to change it. Heron Foods’ frozen ranges were introduced to a handful of stores in early 2018, the year after B&M bought the chain, but have still only reached about 90 B&M branches, according to the business, despite the opening of a new multi-temperature warehouse in Bedford last year.

B&M has also yet to make any significant moves into fresh produce. But experts agree the complexities of a fresh supply chain would be a step too far.

“Their distribution model won’t be set up at this stage for daily deliveries of fresh produce,” says Butler. “It’s another level of capital investment. They’ve got something that works really well, don’t go and spoil it.”

As retail analyst Bryan Roberts notes, B&M “has yet to turn on the transactional switch on its website”.

Yet despite moves from the likes of Poundland and Aldi to make the move to online, Porteous believes for B&M that too would be a mistake. “They are a discounter by nature and when you have those value-based products, actually they’re very difficult to distribute economically online,” he says.

Instead, B&M’s continued trajectory of growth relies on it doing exactly what it has throughout lockdown, argues Porteous. “I see the model as a ratchet,” he says. “In tough economic times, customers switch to preserve purchasing power. B&M had a big leg-up in growth in the financial crisis. They’ve clearly done very well in lockdown as well, and the new customers who have experienced the offer won’t necessarily have a reason to go back.”