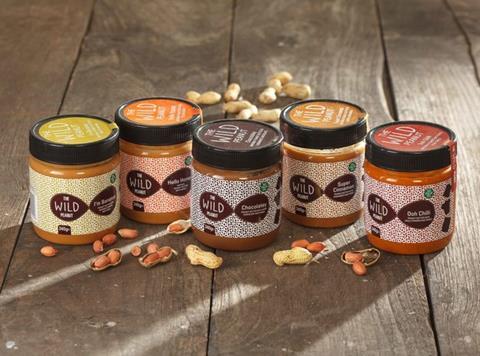 Gourmet peanut butter brand The Wild Peanut, which was rejected by the Dragons of TV’s Dragons’ Den, has secured its first major supermarket listing.

From next month, Asda will stock the brand’s full range – including chilli, cinnamon and banana flavours – in 134 stores. This follows the brand securing listings in Harvey Nichols and Holland & Barratt this year. The butter has no additives, preservatives or palm oil and carries a £4.50 rsp for a 340g jar, with a donation made to global charity TREEAID for every one sold.

The Wild Peanut failed to convince BBC’s Dragons to invest in the business but was head-hunted by Harwich-based world food distributor Surya Foods, which has invested in stock, marketing and PR, and in helping it secure retail listings. Family-run Surya Foods describes itself as the largest supplier of world food lines into Tesco and Asda Established in the 1980’s, it supplies ethnic products including flour, spices and sauces, and owns rice brands Laila, Salaam and Apna.

Brand founder Akeem Ojuko said he was excited to be launching into Asda.

“The Wild Peanut was inspired by a passion to create a 100% natural, tasty product that is an excellent source of protein and fibre,” he added. “It is a product aimed at a health-conscious audience and supermarkets are coming under increasing pressure to offer healthy options to their customers.”

The launch comes as sales of peanut butter are booming, with category value growing 9% year on year [IRI 52w/e 26 April 2015]. Last week, peanut butter brand Whole Earth announced it was launching a new look and on-the-go format as it tightened its focus on health and nutrition.